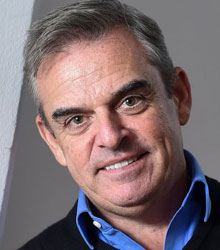 Irish born Paul McGinley had a bright future ahead of him in Gaelic Footballer, until a broken knee cap ended his career at the age of 19. Paul turned to his other love, golf and the rest is history. Paul played in the 1991 Walker Cup helping Liam White beat Phil Mickelson and Bob May then gained his card on his first visit to Qualifying School later that year.

Paul achieved his place in golfing folklore at the 2002 Ryder Cup, when he famously holed a ten-foot putt on the 18th hole in his match against Jim Furyk at The Belfry which won the Ryder Cup for Europe. He also went on to represent European in 2004 and 2006, making him the first European Golfer to be a winner in every one of his three appearances. Once again Paul showed his skills at team golf when he led the Great Britain and Ireland team to victory in the 2009 and 2011 Vivendi Trophy with Seve Ballesteros, 2009 being in his first experience of captaincy.

Paul McGinley has always been passionate about the team format, a point that was recognised by Colin Montgomerie who named him as one of his Vice Captains for The Ryder Cup at The Celtic Manor Resort. Whether it is The Ryder Cup, Seve Trophy, World Cup or Royal Trophy, he has been on a winning team for all of them. Paul's best year came in 2005, during which he finished runner-up three times before concluding a wonderful year with a victory in the Volvo Masters at Valderrama.

On 15 January 2013, he was named the Europe team captain for the 2014 Ryder Cup, making him the first Irishman to captain the Ryder Cup side. Paul continues to help shape The European Tour as a member of the Tournament Committee.

How to book Paul McGinley for your event