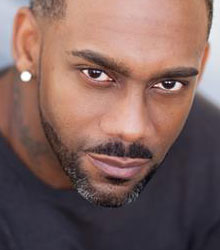 Richard Blackwood, TV presenter and comedian, is well known as the presenter of several TV shows.

Richard claims that he always wanted to be a performer, but he did the sensible thing and took a business degree course. After he graduated he did a one off gig at The Spot in Covent Garden and from there his popularity grew. He also did guest spots on BBC2's late night black entertainment programme The A-Force as well as sketches on The Real McCoy and Five Night Stand.

His hard work paid off and he was picked up by MTV, where for four years he was the host of MTV Select. Viewers phoned in with video requests and Richard Blackwood kept them entertained at the same time. He also hosts Singled Out with Sara Cawood, which was originally made for MTV and is now screened on Channel 5.

Channel 5 was the first TV station to realise his true potential as a comic host and gave him his own comedy Club Class, making him only the second British black comedian to be given his own show to host.

Richard has always written his own material, however after a six-year period, Planet 24 offered him his own chat show, and he had to collaborate with writers. His show was a success and had audiences eating out of his hands. Each episode finished with Richard Blackwood showing his lyrical rapping talent.

Richard says of himself "I can go on TV and be very articulate and there are times when I'll go on and speak in street slang, 'cos I appreciate that everyone watches my show, and I'm trying to tap into everyone."

He also says that the possible reason why he is doing so well is because his show is distinguished from others in its field, as a black British male, whose audience can really relate to the host, fronts it.

How to book Richard Blackwood for your event