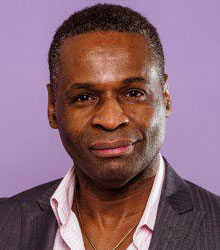 Since appearing on the comedy scene in the 1990s, Luton's lapsed choirboy Junior Simpson quickly established himself as a true 'tour de force' as a live performer as well as a highly sought after and regular face on television.

With his infectious energy and huge stage presence, Junior Simpson has a boundless joy and exuberance that has audiences hooked with hilarity. A true observational comic, Simpson finds his humour in the everyday and humdrum with anecdotes of his world travels as a comedian adding a personal originality to his set.

Although mischievous and daring, Junior Simpson is never crass or crude and can tailor his set to suit any audience making him a favourite for warm up, TV and corporate engagements.

Just a quick message to thank Junior for his work last night. Really appreciated his contribution. It all worked a treat.

A pleasure, I would definitely use Junior again, great with difficult audiences! It went really well... Junior was a perfect match for the audience. He did a perfect job filling in the gaps and getting the crowd motivated and waking them up after the slightly longer than we would have wanted presentations! He was charming throughout and a pleasure to work with.

How to book Junior Simpson for your event