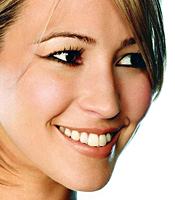 Rachel Stevens started on the road for stardom at the age of 5 attending drama school, but got a major break when at the age of 15 she beat 5000 hopefuls to win a J-17 magazine modelling competition. After a brief stint as a model she attended the London School of Fashion and began a career as a fashion PR, then aged 21 she entered the annals of pop history by joining 'S-Club 7'.

With 5 albums, 4 number one UK hits and a TV series that was shown in 110 countries 'S Club' really did 'Reach for the Stars', but only as a collective piece. Rachel wanted a bid at a solo career; she also wanted to be known by her full name.

'LA Ex' was one of 2003's biggest sellers and was quickly followed by Rachel's debut solo album, Funky Dory. Hitting the Top 10 after just one week, it went on to sell over a quarter of a million copies.

By the summer of 2004, Rachel had another huge hit with the Richard X produced 'Some Girls'. The song provoked rave reactions everywhere from the Pollwinners' Party to the Popbitch messageboard and fronted 2004's BBC Sports Relief campaign.

In 2008she worked on animation film, Glendogie Bogey with Peter Capaldi before being invited to join the cast of Strictly Come Dancing in 2008 where she held the record for the most perfect 10s ever achieved in any series of the show records, coming in second place and increasing her fanbase to a whole new level. The same year she got married to her childhood sweetheart andin 2010 gave birth to their first child, Amelie.

She has been the ambassador for brands including Marks and Spencer, Pretty Polly, Gillete, Virgin Media and Schwarzkopf shampoo. Her viral film for Everyman Testicular cancer became one of the fastest viral hits globally and, after recently coming back to work post-baby, she hosted the BAFTA's red carpet on behalf Orange.

2013 saw her return to work and she secured the campaign for Next's Petite's range in over 550 stores nationwide, online and in the Next Directory; working closely with charity Water Aid she visited some of their projects in Ethiopia and featureson all bottles of Belu water (who donate all profits to WaterAid) in Sainsburys stores across the UK. The nation’s sweetheart was warmly welcomed back to work as guest judge on X Factor in New Zealand and The Voice Ireland.

How to book Rachel Stevens for your event