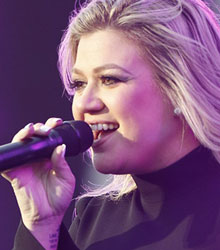 Who would have guessed that small town sweetheart Kelly Clarkson would eventually grow up and become one of America's brightest stars? Certainly, not Kelly!

Kelly's innate singing ability was first discovered in 7th grade after her junior high choral director heard her singing in the school hallway and encouraged her to sign up for the school choir. Upon graduation, Kelly solidified her committment to music, working numerous jobs to finance her demo CD and market herself to record labels. Frustrated with the lack of results and unopened mail, she made her way to Los Angeles along with a friend, hoping for the best.

While in L.A., she found odd jobs to help make ends meet and wound up getting a role as an extra on Sabrina the Teenage Witch. After answering a newspaper ad, she coincidentally hooked up with famed songwriter Gerry Goffin through a mutual friend and began recording vocal demos of his songs. Little did Kelly know that the same song Goffin was famous for, would later provide her with a moment of clarity as she worked to achieve her dream.

Kelly's stay in Los Angeles was tragically cut short after Goffin grew ill, her apartment burned down, and her car got towed. Both emotionally and financially, Kelly was drained. She turned home to recuperate and re-energize herself before heading back to L.A. Shortly thereafter, her best friend, Jessica, presented her with paperwork for American Idol, FOX Television's national talent search competition/television show.

Already jaded from an earlier stint on the WB's Popstars, Kelly was semi-reluctant, but signed the paperwork and went to the audition, hoping for the best. Before you could say 'You're going to Hollywood', Kelly was there.

After dozens of auditions, she found herself centerstage, among the top 30 contestants, and live on national television. Belting out an energized rendition of Aretha Franklin's 'Respect', she captured the hearts (and votes) of people from all over the United States and advanced to the top 10 finals.

Week after week, Kelly quietly gained ground, rising above the competition, enduring a whirlwind promotional calendar, in addition to the responsibility of preparing live performances every week. She was later provided with moment of clarity toward the middle of the competition.

It may have took Kelly a while to realize that she could handle it, but the American public showed no hesitation in casting their votes and naming Kelly Clarkson their American Idol on September 4, 2002.

How to book Kelly Clarkson for your event

US solo pop star and member of 'No Doubt'

US solo pop star and member of 'No Doubt'