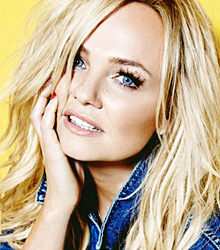 Emma’s childhood ambition to be a singer, in the mould of such pop stars as Madonna, almost happened overnight when the Spice Girls debut single “Wannabe” became a global hit in 1995 catapulting the group to international fame. Known to her fans around the world as ‘Baby Spice”, the Spice Girls sold millions of albums and performed to sell-out crowds wherever they appeared.

After the group parted and went their separate ways in 2001, Emma continued to make music, releasing her debut solo, A Girl Like Me. The album debuted and peaked at number four on the UK Albums Chart with 21,500 copies sold in its first week. This was followed by a second album Free Me, released in 2003 which spent over twelve weeks inside the UK Albums Chart.

She released her first single in 12 years, "Baby Please Don't Stop" in February 2019, in preparation for her fourth studio album My Happy Place, which was released in April 2019.

The Spice Girls reunited in the summer of 2012 to perform at the Olympic Games closing ceremony on August 12th, and this would be the last time the band perform together as a full line up. Since 2018, Emma has reunited with Geri Halliwell, Melanie C and Mel B.

Outside of her musical career, Emma Bunton has forged a successful career as a much-loved television and radio personality. In October 2006, she was a contestant on the BBC’s flagship entertainment show Strictly Come Dancing, finishing third place in the semi-final. And from 2010-2011 she was a judge on the ITV celebrity skating show Dancing on Ice.

Then in 2013, Emma became a radio presenter on the Heart Breakfast show in London alongside Jamie Theakston, having previously guest-presented and also covered maternity leave for then-current presenter Harriet Scott. She left the show in December 2018.

In March 2017, she won the awards for "Radio Presenter of the Year" and "Digital Radio Programme" at the annual Television and Radio Industries Club (TRIC) Awards for her work on Heart London.

Clients often ask about purchasing books for giveaways and delegate packs. Below you’ll find a selection of products by Emma Bunton. Click the images to view on Amazon's website. For bulk orders, please speak with your Booking Agent.

How to book Emma Bunton for your event