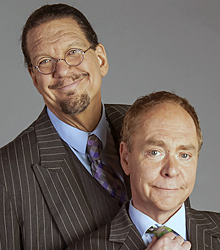 Known for their outrageous blending of magic and comedy, they defy labels, and at times, good taste. They've performed together for more than 40 years; skewering the genre of magic, their sold-out audiences, and themselves - very often all at the same time, within one mind-boggling evening.

And along the way, Penn & Teller have made the hardest trick of all — a remarkable career that ranges from stage to television to best-selling books — look easy. And they've done it all on their own, distinctively offbeat terms.

They call themselves 'a couple of eccentric guys who have learned how to do a few cool things.' Since first teaming up in 1975, when they combined Teller's silent, occasionally creepy, magic with Penn's clown college education and juggling expertise, the two have created an entertainment success story that went from the streets to small clubs to national theatre tours, and now to a current, multiyear engagement at the Rio All-Suite Hotel & Casino in Las Vegas.

Together since 1975, Penn & Teller debuted in Las Vegas in 1993 and have been performing at the Rio since 2001. They are currently the longest-running headliners to play in the same Las Vegas hotel.

The two are winners of an Emmy, Obie, and Writer’s Guild award and also have their own star on the Hollywood Walk of Fame. Their Showtime series, "Penn & Teller: BS!" was the network's longest-running series and was nominated for 16 Emmy awards. They currently have two series on TV, “Penn & Teller: Fool Us” on The CW and “Wizard Wars” on SyFy. On top of all these accolades, Penn & Teller had three successful Broadway runs and two sold-out tours of England. Entertainment Weekly also included them on its "50 Funniest Comedians Alive" list.

Penn & Teller's understanding of magic and their ability to relate to audiences has also garnered serious academic attention. They serve as Visiting Scholars at MIT, that school's highest honour, and have lectured at Oxford University and the Smithsonian Institution. In 2001, they received the Hugh M. Hefner First Amendment Award.

Penn & Teller have written three best-selling books, “Cruel Tricks for Dear Friends”, “How to Play with Your Food”, and “How to Play in Traffic”; and penned pieces in outlets ranging from The New York Times to Playboy.

A truly unique offering on the after dinner circuit, Penn & Teller present a funny, informative and revealing overview of their careers as sceptics, libertarians and magicians who have invented their own very distinct niche in comedy. No topic is out of bounds for Penn & Teller!

During each performance, Penn & Teller offer audience members a moderated presentation with audience participation as well as engaging and interactive audience Q&A sessions and, of course, a presentation of their highly distinctive and original tricks.

Clients often ask about purchasing books for giveaways and delegate packs. Below you’ll find a selection of products by Penn & Teller. Click the images to view on Amazon's website. For bulk orders, please speak with your Booking Agent.

How to book Penn & Teller for your event