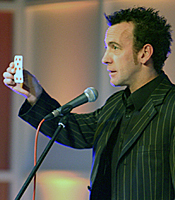 Paul Zenon deceived the nation's youth with several series on Children's BBC in the early Nineties, and went on to produce and host numerous programmes across many genres, including the ground-breaking 'street magic' one-man hour-long specials Paul Zenon Turning Tricks, Paul Zenon's Tricky Christmas and Paul Zenon's Trick or Treat, which were screened worldwide.

He has appeared in venues ranging from the Mirage, Luxor, Orleans and Tropicana Casinos in Las Vegas, to an aircraft carrier in the Adriatic, and a London Palladium Royal Variety Show to the back of a truck in a Bosnian war zone.

Paul Zenon is a long-term favourite on the international comedy club and corporate entertainment circuits and has had sell-out appearances at festivals in Edinburgh, London, Brighton, Auckland, Brisbane, Adelaide and Melbourne, both with his own shows and as a regular in the Olivier Award-winning La Clique.

Zenon appears regularly in the media as an authority with regard to all things weird and wonderful, including the history of Variety and magic — with Houdini as a speciality, the paranormal (as a sceptic) and con-men, scams and hustles.

Paul Zenon is the author of the best-selling books 100 Ways to Win a Tenner, Paul Zenon's Dirty Tricks and Street Magic, all published by Carlton.

His corporate client list is a Who's Who of Blue Chip companies and he has twenty years experience in performing after-dinner cabaret and hosting awards ceremonies and numerous other events for audiences ranging in size from a dozen to thousands at top venues all over the world.

Paul’s act has been described as street-style magic played for laughs and as stand-up comedy with tricks. The magic is contemporary, amazing and funny, and his style is cheeky and irreverent but never offensive. The comedy is fresh, personalised and often improvised; adaptability being one of Paul Zenon's major strengths.

The whole evening was a great success. Paul Zenon was fantastic and the magic he performed left our guests amazed. The fact that it was so close made it all the more incredible and Paul's rapport with the audience meant that everyone was engaged. Whilst performing at my table I saw a senior group director – who is not normally lost for words and a very tough negotiator stare open mouthed as his card was produced! 10 out of 10!

Clients often ask about purchasing books for giveaways and delegate packs. Below you’ll find a selection of products by Paul Zenon. Click the images to view on Amazon's website. For bulk orders, please speak with your Booking Agent.

How to book Paul Zenon for your event