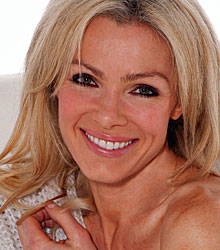 TV personality Nell McAndrew is passionate about health, fitness and running. She has released five fitness DVD’s, the first of which ‘Peak Energy ’ became a best-sellerandto encourage people to exercise Nell also co-wrote a book on running titled‘Nell McAndrew’s Guide to Running’.

Nell McAndrew’s enjoyed a successful career as both model and actor, having made a name for herself as the first model choice for Lara Croft, Tomb Raider.

Nell them came into the media spotlight in 2002 when, despite her fear of spiders and snakes, she was one of the contestants in the original ITV series of ‘I’m a Celebrity…. Get me Out of Here’.

Since then, both Nell’s modelling and acting careers went from strength to strength. She has become an accomplished amateur athlete, with numerous 10km, half marathon and marathons under her belt.Her greatest running achievement is her personal best time of 2.54.39 at the London Marathon — an accomplishment of which she is extremely proud.

Her TV work has included presenting UK Horizon's Born to Fight, reporting for both Channel Four's Big Breakfast and ITV's This Morning and co-presenting a number of Channel 5 and ITV Shows.

Over recent years, Nell has taken time out of the limelight to bring up her two children, but still keeps up her fitness training and completed the Great North Run 2019 (her 6th GNR to-date). She also ran the London Marathon in April 2019 (her 7th London Marathon) on behalf of three charities Caudwell Children’s’ Charity, Cancer Research UK and Alzheimer’s Research UK.

How to book Nell McAndrew for your event