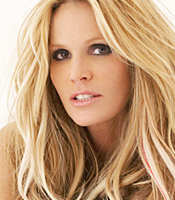 Australian businesswoman, TV presenter, model, and actress, Elle Macpherson is a prominent figure in business, fashion, film and television. She oversees one of the most well-known, and expanding, brand names in apparel and women’s fashion.

Having been featured on the cover of Sports Illustrated a record-breaking five times, in 1986 Time magazine nicknamed her ‘The Body’. This success led Elle to create the workout video ‘Your Personal Best The Body’, which was voted the year’s best for 1995 by Billboard magazine.

As well as modelling, Elle has worked as an actress alongside some of the most diverse names in Hollywood, including Hugh Grant, George Clooney, Anthony Hopkins and Barbara Streisand. Elle also appeared in several episodes of Friends and has hosted Britain’s Next Top Model.

Elle is an astute businesswoman, having created her own highly successful brand of lingerie – Elle Macpherson Intimates. Established in 1989, it became one of the most recognised lingerie brands in the world, and following huge success in the UK, Australia and New Zealand, it was repeated in Canada, the US and the Gulf States. She takes an active role in the development and management of the company and served as its Chief Marketing Officer and later Creative Director.

Following this success, Elle launched bath and body products – Elle Macpherson The Body Beauty Products – in 2005, and they were launched globally in 2008. Then, in 2014, she co-founded WelleCo, and released its flagship product, an alkalising wellness supplement, The Super Elixir.

She is also heavily involved in charity work. She is European Ambassador for RED, an initiative set up by Bono and Bobby Shriver to raise money and awareness for the Global Fund to help eradicate Aids for women and children in Africa. Elle is also an ambassador for UNICEF and the Australian children’s charity Smile, which supports research into rare childhood diseases.

Elle Macpherson is internationally recognised as a global and inspiring icon. she has won awards for her ingenuity and entrepreneurial vision, and continues to be an inspiration for women all over the world.

She is an excellent keynote speaker, conference moderator, host and presenter and speaks on her experiences as both a business entrepreneur and model and covers branding, motivation, media, woman’s rights, women’s health and well-being.

Starting as chemist’s shop assistant in Sydney, developing into a model, maturing into a supermodel, becoming a pioneer in the branding and licensing arenas, creating her own product ranges and, in 2014, launching her wellness business which she has turned into a multimillion dollar, international success.

Elle’s success is nothing short of groundbreaking. Her understanding of the critical points she has encountered in both life and business is incredible. And her ‘take-outs’ and eye-opening examples of flexibility, influence, adaptability, timing, profitability, sustainability are remarkable.

Audiences have described her as “engaging” and “magnetic”.

Elle Macpherson is a unique woman. She spoke brilliantly on the development of her career, her business and her life. She is a true inspiration and sets a great example.

How to book Elle Macpherson for your event