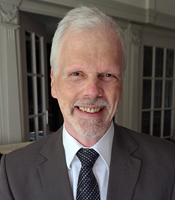 In a long and very chequered career, among a bewildering variety of other jobs, Neil Hanson has been an Oxford graduate, a plasterer’s mate, an ice cream salesman, a holiday camp redcoat and - simultaneously - an art critic and a rugby league commentator. He’s edited the boozer’s Bible - the Good Beer Guide - a job, he says, where it was practically a sacking offence not to go to the pub at lunchtime. He also ran, and later owned, Britain’s highest inn, in a remote corner of the Yorkshire Dales, went round the world twice and worked as a print journalist and radio broadcaster in Britain, Australia and New Zealand.

He is now a very successful author with over 60 published books to his name. As well as his own work, he’s also a “ghost writer” for, among others, sports stars, showbiz legends, captains of industry, SAS men, pilots, a treasure diver, an explorer, a kidnap negotiator, an undercover investigator and a spy.

His after-dinner speech “Inn & Out at the Top” is a laugh-a-minute tour of the quirks and foibles, highs and lows of running Britain’s highest inn - so isolated that its next-door neighbour was 4 miles away and so high above sea level that it had its own climate, with winds that could tear car-doors off their hinges, and winter snows that cut off the inn for weeks on end.

A hugely engaging storyteller, Neil’s account of his time at the inn, grappling with tight-fisted farmers, eccentric characters, bizarre local customs, naturist weekends, “lates and lock-ins”, police raids by appointment, rats in the attic, close encounters with magistrates and planners, and the shooting of a famous double glazing commercial, is suitable for all audiences and all ages.

Highly acclaimed author of historical narratives and award-winning after-dinner speaker, Neil Hanson uses his skill as a storyteller to engage his audience on a diverse range of subjects.

In his after-dinner speeches, Neil takes a ramble around the highlights of his curious career peppered with anecdotes about his ghostwriting clients. Highlights include the uses and abuses of cosmetic dentistry, the ingenious solutions adopted by fast-jet pilots faced with tricky personal problems and a tour de force involving the SAS's disastrous attempts to recruit attack dogs from the Metropolitan Police.

Neil Hanson is a versatile speaker who has spoken at every type of occasion - corporate events, conferences, festivals, dinners and banquets - throughout the UK and is a regular speaker "on tour" in Australia, New Zealand and the United States. The scope and range of his speeches, combined with his naturally entertaining delivery ensures a captivating experience for the audience.

Neil's speeches can be relied upon for humour, wit and a huge diversity of subject matter. Neil's naturally entrepreneurial spirit means he is able to advise on a wide range of topics, with charisma and style.

I would like to thank you for being a wonderful after dinner speaker. Your humour, wit and entertaining ability all conspired to keep a very diverse audience entranced. You also managed to inform, be serious and left everyone wanting more from you, a rare gift. You really made our charter dinner special.

The best - and the best-received - of all the 100 events we have put on here.

Neil Hanson is an extraordinarily lucid, compelling and interesting speaker. I hugely enjoyed his talk and can't recommend him highly enough.

A vivid, engrossing and very entertaining speech. You saw for yourself how well it went down.

Neil Hanson is a captivating speaker.

We have had such positive feedback from those that attended and nearly all mentioned your speech and how much they enjoyed it. My husband was laughing so much he was nearly crying! Having picked your name almost "out of a hat" via the internet, I realise now what a good choice I made!

The delivery and scope was fantastic... a tremendous evening.

It really was a pleasure to host you. I have had nothing but positive responses since the dinner – you really hit the right note – thank you.

Clients often ask about purchasing books for giveaways and delegate packs. Below you’ll find a selection of products by Neil Hanson. Click the images to view on Amazon's website. For bulk orders, please speak with your Booking Agent.

How to book Neil Hanson for your event