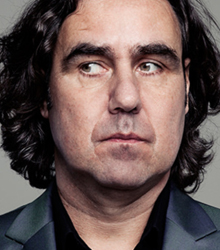 A professional stand-up since 1997, Micky Flanagan draws on his East End background as he ruthlessly deconstructs the Cockney myth with razor-sharp observational wit. He tells a comic tale of a working class upbringing, where alphabet spaghetti is a luxury. Micky has come a long way since then, thanks to a university education, and he is now that rare delight - an intellectual Cockney.

In 2001 he performed in the Big Value Comedy Show at the Edinburgh Fringe as one of four headline acts and in 2003 co-headlined a show with Nina Conti He performed his first full-length solo show, What Chance Change? in 2006 and in 2007 was nominated for Best Newcomer at the Edinburgh Comedy Awards.

Micky's unique brand of intelligent humour appeals to men and women equally, as he bemoans the lot of modern man in pursuit of the perfect idle day, and celebrates being turned away from a night club because his feet are killing him.

Micky Flanagan has built a reputation for reliably strong performances on the nationwide comedy circuit. He headlines all of the main venues including The Comedy Store, Lee Hurst¹s Backyard, Up the Creek, The Stand (both Edinburgh and Glasgow), Komedia, Banana, Bearcat, Hampstead Clinic and Ealing Broadway Comedy, etc.

Micky was a regular performer on Out to Lunch on Radio 2 in 2008 and appeared on Michael McIntyre's Comedy Roadshow in 2009. In 2010 he presented a four-part series for Radio 4 entitled Micky Flanagan: What Chance Change? and has appeared on Mock the Week and Stand Up for the Week.

Clients often ask about purchasing books for giveaways and delegate packs. Below you’ll find a selection of products by Micky Flanagan. Click the images to view on Amazon's website. For bulk orders, please speak with your Booking Agent.

How to book Micky Flanagan for your event