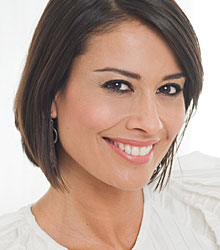 Born in Mossley, Manchester, Melanie Sykes had firmly established herself as a successful model by the time she was 19, doing numerous catwalk shows, magazine fashion shoots and television commercials as well as a major poster campaign for Haagen Daaz.

Melanie's first major break in television came fronting the Boddingtons beer commercial. This led to a number of presenting roles, first on Sky One followed by the BBC's Holiday Programme. She hosted the Hit List UK show for MTV and also covered the Phoenix Festival.

In 1997 Melanie Sykes signed a two-year deal with Channel 4's The Big Breakfast. This move established her as one of the most exciting new faces on television. Then in December 1998 she hosted the Smash Hits Poll Winners Party live on BBC1, for which she received rave reviews.

1999 saw Melanie hosting the new series of Dream Ticket for LWT, continuing her work with the Big Breakfast and filming a documentary for BBC News and Current Affairs called Melanie Sykes' Southall Stories.

From September 1999 Melanie also started working in radio, with a presenting slot on TFI on Galaxy with Tim Vincent. From May 2000, she went on to present her own show for the Galaxy network every Saturday, which brought radio listeners exclusive interviews with celebrity guests and bands. 2001 saw Melanie begin reporting for ITV's daily entertainment show Celebrity.

In 2002 she filmed a brand new daily live show, Today with Des and Mel (ITV1), co-hosting with Des O'Connor. The show won the RTS Best Daytime Programme award and ran for a hugely successful three years.

In 2003 Melanie went solo with two Saturday night ITV shows: a brand new family show called Celebrities Under Pressure and a game show, The Vault. She also co-hosted the Soap Awards with Des O'Connor for ITV1 as well as the National Television Awards Party of the Year.

Melanie can currently be heard on Saturday evenings on BBC Radio 2 as co-host on Going Out With Alan Carr. Melanie hosted The Paul O' Grady Show on Channel 4 on a number of occasions when Paul has been unavailable or on holiday. She also presented a BBC1 series, Gene Detectives and hosted Channel 4's daily live series, Grand Designs Today as well as filming strands for the BBC's flagship show, The One Show, hosting Loose Women on numerous occasions as well as The National Lottery Saturday Night Draw on BBC1. She occasionally covers the Steve Wright show on Radio 2 with Aled Jones.

How to book Melanie Sykes for your event