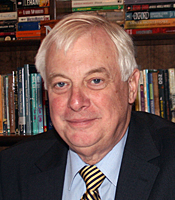 The Rt. Hon. Lord Christopher Patten was born in 1944. He was educated at St Benedict's School, Ealing and Balliol College, Oxford, where he read Modern History and was elected a Domus Exhibitioner. In 1965 he won a Coolidge Travelling Scholarship to the USA.

Lord Patten was elected as Member of Parliament for Bath in May 1979, a seat he held until April 1992. In 1983 he wrote The Tory Case, a study of Conservatism.

Lord Patten was appointed Governor of Hong Kong in April 1992, a position he held until 1997, overseeing the return of Hong Kong to China. He was Chairman of the Independent Commission on Policing for Northern Ireland set up under the Good Friday Peace Agreement, which reported in 1999.

From 1999 to 2004 he was European Commissioner for External Relations, and in January 2005 he took his seat in the House of Lords. In 2006 he was appointed Co-Chair of the UK-India Round Table.

His publications include What Next? Surviving the 21st Century (2008); Not Quite the Diplomat: Home Truths About World Affairs (2005) and East and West (1998), about Asia and its relations with the rest of the world.

Lord Patten is married with three daughters. He reads a lot and is keen on tennis and gardening.

Clients often ask about purchasing books for giveaways and delegate packs. Below you’ll find a selection of products by Rt Hon Lord Christopher Patten. Click the images to view on Amazon's website. For bulk orders, please speak with your Booking Agent.

How to book Rt Hon Lord Christopher Patten for your event

To book Rt Hon Lord Christopher Patten, please submit an online enquiry, email bookings@nmp.co.uk or speak with one of our booking agents on +44 (0)1372 361 004.