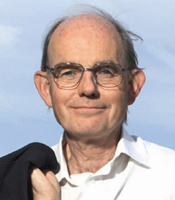 Chris Mullin was first elected to Parliament in 1987 and served as the Labour MP for Sunderland South until 2010. During his time in office he held ministerial posts in the departments of the Environment, International Development and the Foreign Office. He was also the chairman of the Home Affairs Select Committee on two separate occasions.

Before being elected as an MP, Chris Mullin trained as a journalist and played a key role in the successful campaign to free the innocent people convicted of the Guildford, Woolwich and Birmingham pub bombings which resulted in a judicial inquiry and a royal commission.

Away from politics he is the author of several widely acclaimed books including ‘A Very British Coup’ which was made into an award winning television series.

Chris Mullin has also published three volumes of of widely praised diaries that described the progress of “New Labour” from the death of the party leader John Smith in 1994 to the 2010 general election.

In 2011, Chris Mullin was awarded an honorary Doctorate in Law, in recognition of his achievements and was a judge of the Man Booker prize. He is currently chairman of the Heritage lottery Fund in the North East of England and writes regularly for the Observer and the Guardian.

Chris Mullin regularly gives talks on his diaries, politics and the rise and fall of New Labour.

His speech topics include:
• ‘A Walk on Part’, a light hearted account of a career spanning 23 years in parliament
• ‘The Art of Political Leadership’

Clients often ask about purchasing books for giveaways and delegate packs. Below you’ll find a selection of products by Chris Mullin. Click the images to view on Amazon's website. For bulk orders, please speak with your Booking Agent.

How to book Chris Mullin for your event