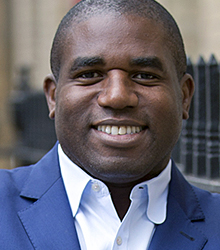 David Lammy is the Member of Parliament for Tottenham, London’s most diverse constituency. One of the leading agenda setters in the fields of social activism, diversity and multiculturalism, David was a member of the previous Labour Government (2001-2010), is respected across the party spectrum and a well-known figure amongst the general public.

In 2011, he successfully managed his constituents and the wider community through the crisis of the London Riots; the biggest challenge facing an inner-city MP since the Broadwater Farm riots of 1985.

David Lammy was elected to Parliament at the age of 27 in 2000, following the untimely death of Tottenham’s long standing MP Bernie Grant. He joined the Labour Government in 2001 and remained a member until 2010. He was Parliamentary Under Secretary for Health, Minister for Constitutional Affairs, Minister for Culture, Media and Sport and latterly Minister for Higher Education. He was admitted to the Privy Council in 2008.

In Labour’s final years in office, David pressed for changes to Britain’s political culture, having visited the Obama campaign and witnessed firsthand a new approach to politics.

A well-known advocate of social activism, diversity and multiculturalism David’s current position, as an active backbench MP, has enabled him to engage in his passion for tackling the big issues facing society (on a macro and micro scale) and provide tangible solutions to bring about effective change. He remains the Chair of the All Parliamentary Party Group on Race and Fatherhood, is an active member of the Crossrail 2 and Well-being Economic Groups and was instrumental in founding the City Talent Initiative.

As MP for Tottenham, David was the subject of the BBC documentary This is Tottenham, which gave viewers an insight into the day to day life of an MP to 115,000 people, speaking 200 different languages and dealing with 6,000 problems raised by constituents each year. He is also the Author of Out of the Ashes: Britain after the riots, a book about the reasons behind the 2011 London Riots and the requirements to prevent a recurrence. The book has been praised for its analysis of the state of modern Britain from across the political spectrum.

David writes for national newspapers, including the Guardian, the Times, the Independent, the New Statesman and the Spectator, is President of the British and Foreign Schools Association and is a former trustee of Action Aid.

Managing Diversity in Business
How to challenge issues surrounding diversity in a progressive and effective manner and help to ensure that it has a positive impact on the workplace and your bottom line.

Crisis Management
How to manage a crisis effectively in a pressurised environment, and the strategic lessons learnt from dealing with testing situations at the front line of politics.

Cities and The Built Environment
Understand the array of challenges and opportunities facing the infrastructure of our ever expanding cities as they go through constant and rapid transformation.

Social Activism in a Fragmented and Multicultural Society
Learn how diversity, multiculturalism and multiracial architecture play an integral role today and how they impact on activism and politics.

UK Politics and Public Life
An insider’s take on the day to day realities of political life and how the tools for dealing with strategic issues at Westminster can be employed at all levels of businesses and organisations.

American Politics
Understand the similarities and differences between US and UK politics through an exploration of the prominent characters, defining groups and trends effecting these ever changing landscapes.

Clients often ask about purchasing books for giveaways and delegate packs. Below you’ll find a selection of products by Rt Hon David Lammy MP. Click the images to view on Amazon's website. For bulk orders, please speak with your Booking Agent.

How to book Rt Hon David Lammy MP for your event