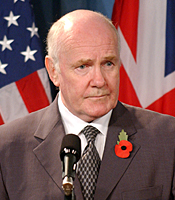 Copyright © US Department of Defense
Sections:

John Reid was born in Lanarkshire. The son of a postman and a factory worker he attended High School in Coatbridge and went on to read History at Stirling University, gaining a PhD.

He has dedicated his career to public service, serving as a Member of Parliament for 23 years, half of which were as a Government minister. He is often described as one of the most experienced Cabinet ministers in modern times having held more ministerial posts at the Cabinet level than any other politician in recent history.

As Defence Secretary and Minister, John Reid presided over the Strategic Defence Review which reconfigured the British Armed Forces in the post-Cold War period. As Northern Ireland Secretary, he played a major role in the Peace Process and negotiated arms de-commissioning with the Irish Republican Army.

As Home Secretary, he led all efforts relating to counter-terrorism and introduced radical reforms refocusing the Home Office towards the contemporary challenges of international crime, immigration and counter-terrorism.

Following nearly a quarter of a century as a Member of Parliament, he has served as senior consultant to several major commercial companies and is presently Honorary Professor & Chair of the Institute of Security and Resilience Studies at the University College London. In 2010, John Reid was formally installed as a member in the Upper Chamber of the UK Parliament, the House of Lords.

With a 10-year ministerial career which saw him undertake nine different positions, John Reid is able to talk on most things but listed below is a few key areas:

Lord John Reid is also an incredibly engaging after dinner speaker regaling anecdotes and stories from his 20 years as a Labour MP.

How to book Rt Hon Lord John Reid for your event