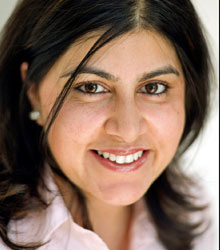 Lawyer, businesswoman, campaigner and Conservative politician, Baroness Sayeeda Warsi has held many roles, however she is best known for being the first Muslim to serve in a British cabinet.

She has also been a long-term racial justice campaigner and was instrumental in the launch of Operation Black Vote, a not-for-profit national organisation that works towards greater racial justice and equality throughout the UK.

In 2004, that she became Conservative Party Vice Chairman for Cities and Diversity and advisor to the party leader, Michael Howard.

In 2005, she stood as a Parliamentary candidate in Dewsbury. In 2007, she was elevated to the House of Lords aged 36, making her the youngest peer in Parliament. Later that year she travelled to Sudan and famously helped to secure the release of the British teacher Gillian Gibbons who was on trial for blasphemy.

In 2010, Sayeeda Warsi was appointed by Prime Minister David Cameron as Minister without Portfolio, and chairman of the conservative party becoming the first Asian to chair a major British political party.

Outspoken and challenging on the issues that many people seek to avoid, she has become an interesting and distinct voice on topics previously considered taboo. She led the government's campaign to criminalise forced marriage and spoke out on the sexual grooming of children by gangs.

A fierce political campaigner, Sayeeda drove the campaign against adopting the Alternative Vote system ahead of the May 2011 referendum, winning what she called 'the mother of all elections' by a ratio of two to one.

She also spearheaded the party's Social Action agenda both domestically and internationally, setting up Project Maja, which has brought politicians and volunteers together to deliver projects in the poorest parts of Bosnia, Herzegovina, Bangladesh, and Turkey.

Sayeeda is a Trustee of the Yorkshire Sculpture Park, and founded Savayra Foundation, in 2002 a UK registered charity which works in Pakistan to empower widows, divorcees and orphan girls through skills, education and other poverty relief programmes. She is passionate that education is the opportunity that makes anything possible. She is committed to widening access to Higher Education for all.

Her business background and passion for the manufacturing sector in particular have made Sayeeda a champion for British business both at home and abroad. She has been a major driver of five start-up companies; two in the service sector and three in manufacturing, all of which have developed into vibrant and successful SMEs.

She studied law at the University of Leeds, gaining an LLB, and trained with the Crown Prosecution Service then the Home Office Immigration Department, before setting up her own specialist legal practice.

Her 2017 book, The Enemy Within: A Tale of Muslim Britain, was described by The Telegraph as “vital reading for decision-makers in Whitehall and Fleet Street. It shows that we need more of the quality that terrorists signally lack: empathy with those different from ourselves.”

Drawing on her own unique position in British life, as the child of Pakistani immigrants, an outsider who became an insider, she explores questions of cultural difference, terrorism, surveillance, social justice, religious freedom, integration and the meaning of 'British values'.

Consistently voted as one of the 500 most influential Muslims in the world, Baroness Sayeeda Warsi is a popular, unique, charismatic and authentic public speaker with a wide reach and international appeal.

Whether she’s delivering a conference keynote speech or a more informal and anecdotal after dinner talk, Baroness Warsi speaks with passion about the highlights and controversies in her public life. She is well known for confronting difficult issues head-on, with fearless energy and eloquence; above all the role of faith and religion in contemporary politics.

She is equally comfortable addressing a large audience of international business leaders or a major congress, as much as speaking at regional SME dinners, charitable associations, WI and women’s networking events.

Clients often ask about purchasing books for giveaways and delegate packs. Below you’ll find a selection of products by Rt Hon Baroness Sayeeda Warsi. Click the images to view on Amazon's website. For bulk orders, please speak with your Booking Agent.

How to book Rt Hon Baroness Sayeeda Warsi for your event

To book Rt Hon Baroness Sayeeda Warsi, please submit an online enquiry, email bookings@nmp.co.uk or speak with one of our booking agents on +44 (0)1372 361 004.