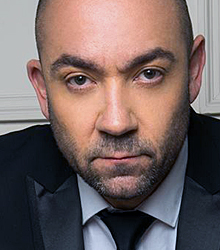 Kenny Thomas is a multi-platinum selling artist who dominated the commercial, soul and album charts in the 1990's. By the time he was 23, he had been nominated for 2 Brit Awards, shared the stage with such luminaries as Edwin Starr, Freddie Jackson, Kool & The Gang, Incognito, Mica Paris, Lalah Hathaway, and Lonnie Liston Smith and was a regular on Top of The Pops.

A former boxer and British Telecom engineer prior to his music career, Kenny’s breakthrough came in 1991 with his debut hit Outstanding, a cover of a Gap Band song, which climbed to number 12 in the UK Singles Chart.

His debut album, Voices (1991), went platinum in its first week and then double platinum, reaching number three in the UK Album Chart and selling over 300,000 copies. It included four hit singles, Outstanding, Thinking About Your Love, Best of You and Tender Love.

At the 1992 BRIT Awards, Kenny Thomas was nominated for an award in two categories, Best British Male Vocalist and Best British Newcomer.

Then, in 1993, came his second album, Wait For Me, which also offered up a slew of hits including Stay and Trippin' On Your Love. It eventually peaked at number 10 in the UK Album Chart.

On the eve of the release of The Best, his third studio album in 1999, Kenny decided, in his own words “to get off of the commercial treadmill, take some time out” to take stock and then eventually get back in the studio writing and recording songs for the subsequent albums Crazy World (2006) and Breathe (2011).

He enjoyed a brief career revival in 2005 when he took part in the ITV singing contest Hit Me Baby One More Time. Kenny was joined in the show by other former A-list pop stars including Shakin' Stevens and Shalamar. In autumn 2006, Kenny Thomas supported Level 42 on their UK tour. That same year saw the release of a new studio album, the aforementioned Crazy World.

In 2010, he completed three years of study graduating with a Bachelor of Science degree in Acupuncture & Oriental Medicine and is now a qualified practitioner.

He released a new album, Breathe, his fifth, in 2011, and in 2013 The Thomas Brown Affair — a collaboration with hit songwriter, producer and jazz pianist Wayne Brown. The album was a collection of classic songs performed in the artists’ own personal and unique styles.

In 2016, Kenny Thomas became the lead singer of 80’s band Living in a Box after they reformed, replacing former vocalist Richard Darbyshire and joining founding members Anthony "Tich" Critchlow (drums) and Marcus Vere (synthesisers). Since then, the band has appeared at live festival events in the UK including Let's Rock, Rewind and Flashback.

Clients often ask about purchasing books for giveaways and delegate packs. Below you’ll find a selection of products by Kenny Thomas. Click the images to view on Amazon's website. For bulk orders, please speak with your Booking Agent.

How to book Kenny Thomas for your event