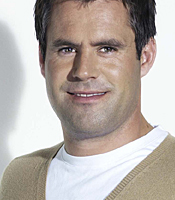 Kenny is a former Rugby Union footballer who played wing for Scotland and London Wasps. Kenny gained his first cap for Scotland against Australia in 1992 aged 20. Having won 70 caps over 13 years, he retired from international rugby union after the 2003 World Cup.

Kenny joined Stirling County as a youth moving through the teams ranks before making his debut as a 17 year old before helping the team secure the Scottish League Championship in 1995/1996 before his transfer to London Wasps in the inaugural professional season.

At Wasps Kenny has developed as a fundamental and pivotal player in the clubs period of sustained success, including 2 League titles, 2 Tetley Bitter Cups and the Parker Pen Challenge Cup triumph in 2002/2003.

Kenny has also enjoyed success at international level with Scotland including the 1999 Five Nations Championship and the IRB Rugby World Cups of 1995, 1999 and 2003 (quarter-finalist on each occasion).

Kenny is married to sports presenter and fellow Strictly Come Dancing contestant Gabby Logan. They have two children. Kenny is available for motivational and after dinner speaking, hosting award ceremonies as well as endorsements, media work and personal appearances.

Clients often ask about purchasing books for giveaways and delegate packs. Below you’ll find a selection of products by Kenny Logan. Click the images to view on Amazon's website. For bulk orders, please speak with your Booking Agent.

How to book Kenny Logan for your event