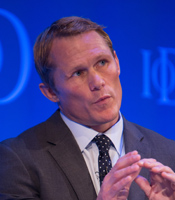 Josh Lewsey is a man with drive, focus and who understands how to achieve success. A world cup winning rugby union player and British and Irish Lion,Josh featured heavily in England’s world cup campaign that saw Clive Woodward’s team lift the trophy. He was also a key player in England’s campaign to retain the Rugby World Cup in 2007, scoring the only try against France in the 14-9 victory which put England into the final.

Josh Lewsey has a rare insight into a combination of elite performance environments. Not only does he know about winning and losing from his immensely successful period as a professional rugby player, but Josh is also a graduate of Sandhurst, having served as a military officer in the Royal Artillery. He’s also worked as a Management Consultant with 14 years business experience, including roles at PwC, Citigroup and Head of Rugby at the Welsh Rugby Union.

Born in Kent, Josh went to school in Watford close to Saracens rugby club, but it was London Wasps where he was to make his name after playing junior rugby at Amersham & Chiltern RFC. He joined Wasps aged 18 playing in the colts before going on to captain the Under 18 side. Whilst at University in Bristol, he played Bristol RFC before re-joining Wasps at 21, the club that come the end of his career he played for 262 times in 11 years. He departed at the end of the 2008/09 season having helped the club to four Premiership titles, two Heineken Cups and a European Challenge Cup success.

Specialising in Organisational Performance, Josh has led and consulted on various strategic change projects in the business and sports sector. He was the Head of Rugby for Wales for the Welsh Rugby Union, leading the strategic and structural aspects for both the Elite and Community game on behalf of the Executive Board. Given the insight, experience and knowledge developed throughout an accomplished career both on and off the pitch. Josh's playing highlights included winning multiple trophy titles, at all levels and is one of the respected characters of his generation.

Beyond sport, he is different from his peers by being recognised for his breadth of interests and having always worked alongside his sports career. Of those interests, adventure and challenges play a consistent theme, for which mountaineering in the Andes, Alps and Himalayas, arctic survival and a trip to the North Pole are highlights.

Josh Lewsey is available to speak on a range of topics including:

Clients often ask about purchasing books for giveaways and delegate packs. Below you’ll find a selection of products by Josh Lewsey. Click the images to view on Amazon's website. For bulk orders, please speak with your Booking Agent.

How to book Josh Lewsey for your event