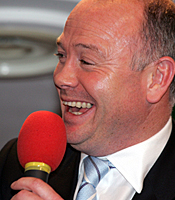 Ieuan is a Welsh legend whose reputation is truly international!

At international level, Ieuan held almost every record in Welsh rugby - a record breaking 72 caps for Wales, playing 28 games as captain and the most tries in a game, with four. He has scored 33 tries for his country (this tally only being topped by David Campese (Aus), Rory Underwood (Eng), Serge Blanco (Fr) and John Kirwan (NZ). He has played in all three world cups. Ieuan has made seven appearances for the British Lions and is a member of the elite band of Triple Lions Tourists, touring in Australia 1989, New Zealand 1993 and South Africa 1997, where a groin injury ended his trip prematurely.

Ieuan Evans declared his retirement from international rugby on 11 March 1998.

Since hanging up his boots this record breaking sportsman has turned speaker, presenter and broadcaster; with regular appearances on ITV, Sky and the BBC as well as fronting corporate productions.

Ieuans years on the pitch have led him to become a truly inspirational motivational speaker as well as a very witty raconteur - and his golf handicap is impressive!

Leadership
In a world where the pace of change is ever increasing, leadership is possibly the most important skill organisations need. Leaders need a wide range of skills, the ability to instil a sense of urgency, to build a compelling vision & coalitions that will be powerful enough to ensure they reach their goals.

Ieuan Evans works with a wide variety of Blue Chip companies developing and delivering Leadership programmes, leveraging his knowledge of a various leadership styles and techniques from his sporting background.

After Dinner Speaking
Light, anecdotal and experienced, Ieuan Evans is comfortable in the widest variety of surroundings and occasions. Ieuan is capable of tailoring content of his speech to the audience and has contributed to events from the smallest corporate lunch / dinner to the largest scale sporting functions across the UK.

With Ieuan Evans on board, you not only have a sporting legend but a charming and engaging guest.

How to book Ieuan Evans for your event