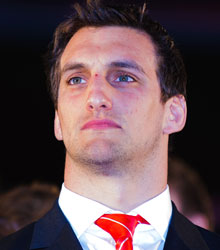 Sam Warburton is acknowledged as one of the best open-side flankers in the world; not only is he an enduring titan of Welsh rugby, he's an icon of the game. However, as successful and talented as he's proved himself to be, time after time, it's Sam's intelligence and strategic thinking that set him apart on the rugby field as both a great player and an inspiring leader.

Intelligent, calm and thoughtful — in many ways seemingly the exact opposite of the smash and crash of modern rugby — Sam Warburton's edge never came with his size, but with his depth of thought, his reading of movement, and his understanding that, to be a uniquely successful and inspiring leader, one needs to set goals that far exceed the ambitions of even the most ferocious of opponents.

In leading others, and in pitting himself against the world's elite players, throughout his impressive playing career Sam was forced repeatedly to push himself to the very edge of his physiological and mental limits.

Making his professional debut in the 2009 season for Cardiff, so impressive was Sam that he was selected for the Wales squad that toured North America that year, making his debut off the bench against the United States. Then, in 2011, at the age of 22 he became Wales' second youngest captain when he captained his country against the Barbarians, leading Wales to the semi-finals of the World Cup and to a triumphant Grand Slam in the Six Nations in 2012, followed by the start of the 6 nations title that Wales retained in 2013.

Despite his tender age, Sam's immense displays for club and country were recognised still further in April 2013, when, at just 24, he was named the Lions' captain for the extraordinary tour to Australia. On the 4 March 2015 versus Ireland, Sam Warburton made history again by surpassing the record of 33 caps as Wales captain held by Ryan Jones.

After making 96 appearances for the Cardiff Blues, the Wales captain signed a new National Dual Contract with the region in 2016, stepping down as Wales captain after six years, 74 test caps and 49 matches in charge.

In 2017, after a year `in the wilderness', Sam was announced as the Lions captain for the historic 2017 tour to New Zealand, becoming only the second man to captain a Lions squad for a second time and the first ever Lions Captain never to lose a series in the professional era. At the time of selection, he had 84 Wales caps and 4 Lions caps.

In 2018, Sam Warburton announced his retirement from all forms of the game at the age of 29, following his ongoing struggle to recover from neck and knee surgery. He'd made 175 appearances for the only club he represented, Cardiff Blues, and led Wales to consecutive titles in 2012 and 2013 with the former being a Grand Slam. He also earned 5 test caps for the British and Irish Lions on two tours, both times as captain and retires as the most successful Lions captain in history.

In November 2019, he joined Wales coaching staff as technical advisor breakdown/defence. He was awarded an OBE in the 2018 New Year's Honours List for services to Rugby Union.

Whether he's giving a keynote motivational speech or taking part in a moderated Q&A/‘fireside chat’, Sam Warburton is regularly sought-after to explore the nature of leadership, the value of self-control and the precision of mindset.

In honest and candid presentations, Sam provides intimate access not only to the realities of the dressing room and the heroes and villains of the modern game, but to the unique mindset required to make someone a genuinely great leader.

An inspiring leader with an equally inspiring story to tell.

Clients often ask about purchasing books for giveaways and delegate packs. Below you’ll find a selection of products by Sam Warburton OBE. Click the images to view on Amazon's website. For bulk orders, please speak with your Booking Agent.

How to book Sam Warburton OBE for your event