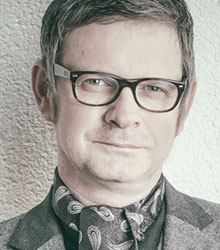 A regular on BBC 5Live’s Fighting Talk and BT Sport’s popular ‘The Football’s On…’, Ian is a much sought after comedian, compere and corporate awards host who has achieved great success on the London and National circuits and is a regular headliner and compere at London’s famous Comedy Store.

Ian is also the author of the hugely successful books, ‘A la Mod: My So-Called Tranquil Family Life in Rural France’ and ‘C’est Modnifique!: Adventures of an English Grump in Rural France.

Ian’s laconic observations on life, from the problems of using the wrong vocabulary in a German Pizza Hut to an almost pathological hatred of most forms of physical exertion, have proved hugely successful with live audiences all over the world from Australia to China, and the Philippines to the Middle East. He hasn’t performed in South America, but feels no reason why they wouldn’t love him there too.

Following a sell-out run at the Edinburgh Festival where he appeared with Catherine Tate, Ian was one of only seven British comics selected to appear at the pinnacle of all comedy festivals – Montreal’s Just for Laughs. Alongside the likes of Jimmy Carr, Ian performed in the sell-out Britcom showcase proving to be such a success he subsequently went on to headline the Worldcom show at the festival’s finale.

Ian has headlined at The Reading and Leeds music festivals, but he is too well dressed to consider appearing at Glastonbury. Ian has performed to a large number of corporate audiences ranging from 12 people in a hotel suite (Harley Davidson) to thousands of people at the Excel Arena, or on the ‘corporate strip’ of Park Lane, and in top venues overseas.

His client list is broad, from multinationals such as McDonald’s, Hilton, Sony and VW to more low-key, small company affairs and a barn-storming set at the National Pig Awards!

Ian judged the audience & vibe excellently, and deservedly got many laughs. He was so very relaxed & adaptable, coping unflappably with the occasional oddities, handling it all impressively and many people commented on how great he was, which was lovely to hear.

Ian’s material was very well received by the audience. I’m sure he gained some new fans and advocates. He hit the tone required perfectly. Pound for pound the best available.

Ian was very professional and a delight to work with, very easy going. He incorporated a number of our sponsor names into his set which went down very well. The audience responded really well to his humour which I think was very funny and just what we needed after a long conference day.

Feedback has been really great and as you could tell from the 'too loud’ laughing, I thought it was a very funny gig!!

Ian’s performance was really well received and was a great ice breaker prior to the Awards Ceremony…thanks to Ian for making it such a brilliant night!

A fantastic host at the two awards ceremonies that he recently helped us with. His jokes were fresh and funny and the audience loved him at both events. He was fantastic at keeping the proceeding flowing smoothly and was a areal pro. I would recommend Ian as a host for any event.

Ian was fantastic. He fully met our criteria whilst matching the tone perfectly with humour but also recognising the importance of the awards being given out on the night. The audience was a little cold to start (as expected) but once they settled down they were impressed with him and by the end of the night they were in full swing and thoroughly enjoyed themselves.

Clients often ask about purchasing books for giveaways and delegate packs. Below you’ll find a selection of products by Ian Moore. Click the images to view on Amazon's website. For bulk orders, please speak with your Booking Agent.

How to book Ian Moore for your event