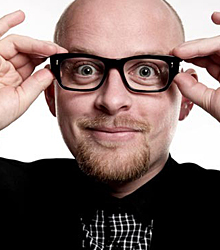 Dan Nightingale is widely regarded as one of the best performers working on the comedy circuit today. Mixing fiendishly accurate observation with energetic characterisations and killer punch lines, his comedy is original, playful, intelligent, poignant and exciting; sometimes ridiculous... but always hilarious.

Dan began his comedy career in Newcastle in 2002 and then moved onto Manchester, where he spent ten years and became one of the most recognisable faces on the North West Comedy circuit. He founded the Frog and Buckets ‘Beat the Frog’ amateur night, which quickly became the best new comedy night in the North.

As well as developing his reputation as a top-class circuit headliner and in-demand MC and host, he has also performed regular TV warm up for the likes of Jonathan Ross, John Bishop and Celebrity Juice.

Dan produces his own 'In The House Podcast', which is available on Podomatic and itunes, and which each week features a different act from the UK circuit.

Boasting arguably the best stage introduction at this year's Fringe, Dan Nightingale's musings have warmth and easy going charm. Solid material. 'Its been a comedy buffet', he surmises, and we have all been well fed.

A superb compilation of brilliantly crafted stories written by someone who unquestionably has a keen and instinctive eye for comedy. Nightingale's buoyant energy makes for an entertaining hour of stand up.

It is his powers of observation that make him so entertaining. Outrageously funny.

How to book Dan Nightingale for your event