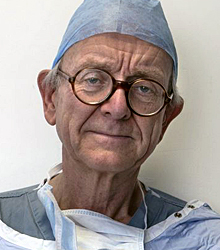 Henry Marsh is one of Britain’s leading neurosurgeons and was a pioneer of brain operations under local anaesthetic. He was senior consultant at St George’s Hospital in London until 2015 when he became semi-retired.

He read politics, philosophy and economics at Oxford University before studying medicine at London's Royal Free Hospital. Henry became a Fellow of the Royal College of Surgeons in 1984 and was appointed Consultant Neurosurgeon at Atkinson Morley's/St.George's in 1987. He has been the subject of two major documentary films: Your Life in their Hands (2003) which won the Royal Television Society Gold Medal and The English Surgeon (2009) which won an Emmy.

Henry has supported and worked extensively with neurosurgeons in the former Soviet Union, mainly in Ukraine, to modernise neurosurgery there along Western lines. He pioneered brain surgery under local anaesthetic allowing patients to converse with their surgeons whilst they operate, minimising the risk of damaging 'eloquent' parts of the brain.

Despite the above, Henry insists that he is not a great surgeon. The surgery itself, he says, is not technically difficult. "It's the decision-making that is complex and difficult; you are making very human decisions, about the quality of life and the way people will be affected."

Henry's understanding of the nature of suffering is deep and personal. As a newly qualified junior doctor, his three-month-old son was diagnosed with a brain tumour — acute hydrocephalus — swelling in the brain. He was operated on a week later, and the waiting was absolutely torment for Henry and his wife.

Henry recalls that at the end of the operation they didn't know what had happened; having to wait hours for the surgeon to find out. So he learned a hugely important lesson from that: which is when those closest to you are undergoing brain surgery it's extremely miserable. His son's tumour was removed and he recovered fully; the eldest of Henry's three children; he also has two daughters.

As a result of this terrible experience with his own son, Henry always rings a family as soon as possible after surgery and waits until the patient in recovery is fully awake. Only then can he be sure that an operation has been wholly successful. He doesn't think many surgeons make these sorts of calls, and comments "It's a kindness; it shows you understand what relatives are going through. But also, if things go wrong, mostly people will forgive you."

On the difficulties of being a surgeon, Henry commented in a recent interview “We have this very complex relationship with patients. It's not one of straightforward altruism at all; it's a very difficult relationship. You have to be both hard and soft at the same time. You certainly don't want to be empathetic. If empathy means you actually feel what your patients are going through, actually... you can't do it. When I was doing paediatric cases — and my own son had a brain tumour when he was a baby — if I felt for the children I was operating on as though they were my own son, I couldn't do the work. For surgeons, patients are objects of anxiety and dislike often, as well as recipients of our compassion.”

It’s often said that someone ‘has the hands of a surgeon’, long, tapered, delicate and rock-steady; however Henry's hands are not like that at all, but instead he possesses the hands of a skilled woodworker, a keen gardener and an energetic beekeeper, all of which he is when not performing lifesaving operations.

Henry Marsh is a captivating storyteller and speaks candidly about success and failure and what it feels like to slice through the matter that creates thought, dreams and memories.

His career as a neurosurgeon has taught him most about his own fallibility and self-deception. We all make mistakes but the consequences of a neurosurgeon’s mistakes can be so terrible that many surgeons develop all manner of defensive psychological strategies in order to continue working.

Henry Marsh talks with searing honesty about the cemetery that all surgeons inevitably carry with them; and why he would prefer to be seen by his patients as a fallible human being, rather than a demigod or villain.

The event was a big success! Henry Marsh's speech was very impressive and gave us the possibility to enter another world - and to link topics like trust, mistakes and honesty with our everyday life. It was a great pleasure to get to know Henry, he has amazing stories to tell.

Clients often ask about purchasing books for giveaways and delegate packs. Below you’ll find a selection of products by Henry Marsh. Click the images to view on Amazon's website. For bulk orders, please speak with your Booking Agent.

How to book Henry Marsh for your event