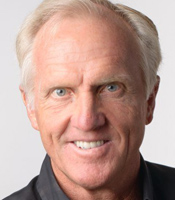 Greg Norman decided to give golf a try as a 15-year-old and just two years later, at his first day at Virginia Golf Club in Brisbane, Australia, he was a scratch player.

He has won 91 professional events around the world, including two British Open Championships and 20 U.S. PGA Tour titles. The culmination of an astounding golfing career came in November 2001, when he was inducted into the World Golf Hall of Fame. For his countless accomplishments, Greg Norman garnered the highest percentage of votes of anyone that has been inducted into golf's most exclusive fraternity. Greg was also named as number 2 player (just beaten by Tiger Woods) on Golf World's list of ‘The 100 Best Modern Players.'

While Greg Norman's well-documented success on the golf course has assured a lofty place in history, he continues to work at both his game and a business that promises to succeed long after his playing days are behind him. He serves as Chairman and CEO of Great White Shark Enterprises, a multinational corporation with business ranging from golf course design, community development, apparel, wine, event management, licensing and merchandising.

Greg Norman has been honoured with the Golf Writers Association of America's Charlie Bartlett Award. His commitment to charity has spanned three decades with such diverse causes as children's cancer research, relief to victims and families of Hurricane Katrina, the Tsunami and 9-11, and ecosystem oceanic research. The award, named for the first secretary of the GWAA, is given to a professional golfer for his/her unselfish contributions to the betterment of society.

Greg is known as much for his entrepreneurial spirit in the boardroom as his swaggering style on the golf course. He has quietly aided charitable efforts including helping raise more than $10 Million for charities, including the CureSearch National Childhood Cancer Foundation and Ronald McDonald House.

During the Hurricane Katrina disatster, Greg Norman lent his helicopter to relief efforts and teamed with former Presidents Bill Clinton and George H.W. Bush to benefit Tsunami Relief. Presidents Clinton and Bush joined Norman to create the fundraiser “Three Friends One Goal” which raised more than $2 Million for Asian Tsunami victims. He also participated in Hope Takes Flight, which helped raise $4 Million for the University of Pittsburgh's Hillman Cancer Center.

Greg Norman was a huge hit! He was so personable and accommodating to all of our guests. His talk was a fireside chat and it was amazing. It could not have gone better. Thanks again for everything and I hope we can work together again in the future.

Clients often ask about purchasing books for giveaways and delegate packs. Below you’ll find a selection of products by Greg Norman. Click the images to view on Amazon's website. For bulk orders, please speak with your Booking Agent.

How to book Greg Norman for your event