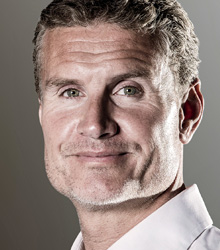 One of the top British racing drivers of his generation, in a career spanning 15 seasons, David Coulthard competed in 247 Grand Prix, winning 13 of them and finishing on the podium on 62 occasions. He is now available for after dinner, business keynote and motivational speaking, fireside chats and appearances.

Having dominated Britain's junior Formula Ford categories in 1989, David became the first ever recipient of the McLaren Autosport BRDC Award for young drivers. In 1991 he fought a titanic battle with future Formula 1 rival Rubens Barrichello for the British Formula 3 Championship, and won the prestigious Macau F3 Grand Prix.

From there, he joined Williams as a test driver in 1993 and made his Formula One debut in 1994, competing in eight Grand prix for the team during the season. Following Ayrton Senna's death, he was promoted to the race team alongside Damon Hill for the Spanish Grand Prix in 1995, became a full-time F1 driver. That year he won the Portuguese Grand Prix and finished third in the championship.

Twice a winner in the Monaco Grand Prix, David Coulthard was team-mate to Mika Häkkinen in the Finn's two Drivers' Championship winning seasons for McLaren Mercedes before helping establish the Red Bull team in 2005. David amassed a notable 535 points placing him seventh on the all-time scorers list, and making him the highest scoring British driver of all time.

His best Drivers' Championship finish was runner-up in 2001 while driving for McLaren. After retiring from F1 driving in 2008, having competed in the DTM series since 2010, David continued working with Red Bull as a consultant and joined the BBC as a commentator. Television coverage of F1 regularly reaches over 5 million UK viewers on Channel 4 and Sky Sports, and since 2016 David has worked with Channel 4 on their F1 TV coverage.

In 2018 David Coulthard wrote a business book ‘The Winning Formula - Leadership, Strategy and Motivation the F1 Way’. Drawing on his extensive experience speaking to packed conferences around the world on the subjects of Teamwork, Motivation and Leadership, as well as being invited into some of the world’s leading companies to talk about high performance and efficiency, the book lifts the lid on what it takes to be a winner in the world of Formula One and how that can be applied to life and business.

Few people have made the transition from elite sports person to multifaceted entrepreneur with as much skill, flair an success as Formula 1 driver David Coulthard. Winner of thirteen Grand Prix, he has also made his mark in property, television production and most famously his media work as a lead F1 television presenter.

Drawing upon the experience gained throughout his highly successful career as one of Britain's elite Formula One drivers, David Coulthard opens the doors to the inside world of F1 and delivers invaluable lessons in teamwork and leadership. He empowers individuals to achieve their goals and offers audiences unique insights into the strengths and challenges facing a top racing driver.

Through his highly sought-after presentations, David reveals in simple, entertaining and utterly compelling terms how he has been able to master this mind-boggling variety of disciplines by applying the skills honed from his years at the top of the world’s most demanding motor sport.

Teamwork — how a top Formula One team enables drivers, technicians and engineers, and sponsors to work together and create a winning team

Motivation — how to succeed in the high performance, high pressure world of Formula One, and consistently reach peak performance levels

Clients often ask about purchasing books for giveaways and delegate packs. Below you’ll find a selection of products by David Coulthard MBE. Click the images to view on Amazon's website. For bulk orders, please speak with your Booking Agent.

How to book David Coulthard MBE for your event