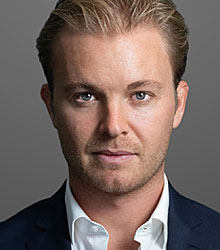 Nico Rosberg is a sustainability entrepreneur, investor and the 2016 Formula One™World Champion with Mercedes AMG Petronas. He is also the driver who won it all, consummating a dream he had possessed since childhood, and then simply walked away.

Since his retirement from Formula One — only five days after winning the Championship — Nico has embarked on a career as a sustainability entrepreneur and invested in a number of green technologies and mobility start-ups such as Lilium, Volocopter, What3Words, TIER Mobility and FIA Formula E.

Nico Rosberg drove for both Williams F1 and Mercedes AMG Petronas. He originally started racing in F1 in 2006 after winning the 2005 GP2 Series. During his eleven-year career at the pinnacle of motorsport, Rosberg won 23 Grands Prix and took 30 pole positions. He also routinely battled his teammate, Lewis Hamilton, finishing second in the championship standings in 2014 and 2015. After winning the 2016 title, he retired from the sport, but has remained as an ambassador for Mercedes.

His drive as an entrepreneur is fuelled by the will to drive positive change for society and mankind. Nico pursues this approach not only in his business activities, but also as an ambassador for sustainable change in mobility through technological innovation.

Nico Rosberg is an investor and shareholder of the all-electric racing series Formula E. Rosberg is also a co-owner of the German vehicle technology company TRE GmbH, one of the leading companies in the field of chassis development.

Based in Monaco, he currently employs a permanent workforce of seventeen people who manage a large number of projects with the support of a dedicated team of international experts in Monaco, Great Britain and Germany.

In 2019, Nico Rosberg co-founded the Greentech Festival, a global platform for innovative and pioneering green technologies and a sustainable lifestyle, which attracted almost 40,000 visitors at its premiere.

Since 2020, he has also been a judge on the TV show Die Höhle der Löwen, the German version of the BBC’s Dragons’ Den, with the aim of funding sustainable and future-orientated start-ups.

Nico remains linked to Formula One through his commentary for the German TV channels SKY & RTL, his Rosberg Racing young driver’s academy and his engineering company TRE. He continues his work as an ambassador for many outstanding brands such as Rolex, Deutsche Bahn, Kempinski Hotels and Heineken.

In 2021, Nico signed up as a new Brand Ambassador for international tyre manufacturer Continental. The aim being to assist the brand in pursuing a particularly rigourous sustainability strategy. As well as leading the way in the development of environmentally compatible technology solutions, they set themselves extremely exacting goals to become fully carbon-neutral by 2040.

As a philanthropist and human rights supporter, Nico Rosberg has worked for the Viva con Agua de Sankt Pauli charity, which supplies water and basic sanitation to individuals in developing countries. In response to the murder of George Floyd, in June 2020, he donated €10,000 to the NAACP Legal Defense and Educational Fund to aid its efforts in educating the public on racism and ending segregation.

In his keynote presentations, Nico Rosberg talks about harnessing the power of failure, keeping his cool on the track and why he's started hanging out with Silicon Valley entrepreneurs.

With his background as a World Champion Formula 1 driver, he speaks about endurance, making decisions in a fast paced environment, how to perform under pressure and how you can best prepare for these situations.

Since leaving the racing series, Nico is passionately committed to the issue of sustainability. As an entrepreneur and investor in green technologies and mobility startups, he represents visionary innovations that make the world a little better.

In numerous projects around the world, he also contributes to the topic of environmental protection, health, equality and justice. In 2019, Nico Rosberg co-founded the Greentech Festival, a global platform for pioneering sustainable ideas that takes place annually in Berlin.

Since 2021, he has been competing with Rosberg X Racing in Extreme E, a racing series that aims to draw attention to the consequences of global climate change.

How to book Nico Rosberg for your event