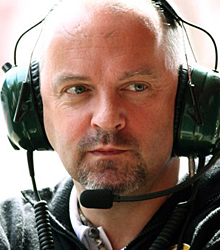 Mike Gascoyne, is one of the most renowned technicians in Formula One and has carved out an illustrious career at the pinnacle of international Motorsport for over two decades.

Having studied for a Ph.D. in fluid dynamics at Cambridge University throughout the 1980s, Mike’s passion for Motorsport took him into the world of Formula One for the first time in 1989 when he joined the McLaren team. Since 1989 Mike has continued working at varying teams such as Sauber, Tyrrell, Jordan, Renault, Toyota, Force India and the Caterham Group. Mike has extensive experience in Motorsport and sports car engineering as well as international top level management.

From 2009-2015 Mike Gascoyne was CTO at Caterham Group, where he was responsible for setting up and managing the Group's Motorsport entities including the F1, GP2 and Le Mans teams. He also managed business development using his experience in Formula 1 engineering and project management to develop competitive turn-key solutions for the automotive, marine and aviation industry.

Mike’s two main achievements during his time at the Caterham Group were setting up the Lotus Racing Formula 1 Team from scratch in 2009/2010 as well as negotiating and finalising the automotive partnership between the Caterham Group and Renault Alpine in France to produce a sports car on a joint design and production platform.

Mike Gascoyne replaced Eddie Jordan for several races as technical pundit for the BBC F1 coverage on live TV and Radio and was one of the most sought after personalities in the pit lane for media work. He is regularly on TV as a guest pundit for various Sky F1 channel feature programs.

Away from the fast-paced world of F1, Mike’s other passion is offshore sailing, and he aims to bring F1 standards of technology and logistics to offshore racing, to encourage green, sustainable and reusable energy technologies in the marine, automotive and aerospace sectors and to utilise his extensive experience in R&D, engineering, competitive sailing and sports marketing. He has competed in international offshore sailing events such as the Transat Jacques Vabres 2013, The Rolex Fastnet Race 2015, the RORC Transatlantic race and in 2012 completed a solo transatlantic trip on a Class 40 racing yacht.

Mike has previously raced old F1 cars and organised then lead expeditions in the Himalayas during student years.

Mike Gascoyne is an accomplished and sought-after keynote business speaker, offering audiences a fascinating, unique and candid insight into the innermost workings of the most established brand names in the motor racing industry.

Equally at home addressing ‘the industry’ and speaking to his peers, or a completely lay audience, Mike speaks on a range of topics, from team motivation and the meticulous organisation within F1 to broader business themes including:

“What Can Global Societies Learn From Motorsport?” and
“Safety, Reliability and Performance Through Design”

Team Building
Formula 1 is a top level sport that relies on team building and shared success. Mike Gascoyne is able to share his experiences of building winning teams in a competitive environment and communicating how to apply those skill to different industries and cultural environments.

Management Training
Having worked in competitive environments from small sports teams to global corporations  Mike Gascoyne can help to advise your management team on the lessons from operating in a competitive fast changing environment and adapt management and operation styles accordingly.

Among other engagements, Mike Gascoyne was keynote speaker for the 2014 World Yacht Racing Forum in Barcelona and the IOT Show 2015 in Singapore, as well as acting as joint presenter together with fellow motor sports expert Mark Gallagher for management training workshops at the London School of Business in 2015.

Mike Gascoyne has proved an essential part in getting the technical elements of the relationship across to our top customers and also to give unparalleled insight into the larger technical issues of Formula 1. Not only was he able to explain clearly some of the nuances of the technical regulations to a broad audience but also, due to his extensive experience from many years in the sport was able to entertain the audience with anecdotes about cars, teams and drivers from the past. I have worked for nearly twenty years in and around Formula 1 and I found that I learned something new after every talk I was lucky to attend.

The engineering performance challenges in Formula 1 bear a striking resemblance to those facing our clients in asset intensive industries today. Mike Gascoyne gave a clear parallel view of our industry and a glimpse of where it’s heading: predictable machine reliability is not only mandatory in winning a race, it determines whether you are able to compete at all. Mike’s passion, honesty, edgy imagery and compelling delivery were a great addition to our stage, and we hope to invite Mike back soon to share more insights from his accelerated world of high performance engineering. Highly recommended!

Mike Gascoyne entertained and educated our packed showroom with a series of well told amusing anecdotes and detailed insights into the mystical world of Formula 1. Clearly his technical knowledge is vast and it was fascinating to hear his views on how F1 is developing and how it needs to change. Mike was a very amiable, confident and polished speaker, I would have no hesitation in using him again or indeed recommending him to others.

I would just like to personally thank you for your involvement in the event yesterday. Most people don’t get to hear that honesty as too often the conversation feels scripted.

Mike Gascoyne joined the World Yacht Racing Forum in 2014 as one of the event's keynote speakers. Undoubtedly his keynote was one of the highlights of the event with his extensive experience across sports brought to bear with real focus on the yacht racing world. His delivery was engaging, concise and, as all best keynotes do, raised some pertinent issues and questions for the industry to address.

How to book Mike Gascoyne for your event