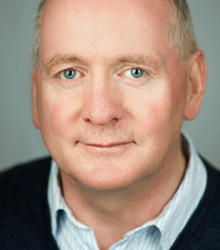 Formula One is a unique mix of business and sport, where strong leadership, efficient team work, split second decision making and a clear focus on delivery are required to compete at the highest levels in the 20 Grand Prix' which comprise the FIA Formula One World Championship.

Mark Gallagher has worked in Formula One for over 35 years and with many of them spent working as a senior executive within the management of Jordan Grand Prix, Red Bull Racing and Cosworth.

While operating at the centre of this fascinating sports business, Mark has worked with the world's top F1 drivers and team owners, giving him a privileged understanding of what it takes to be a world class competitor. He has worked directly with world champions Michael Schumacher, Ayrton Senna, David Coulthard, Mika Hakkinen, Jacques Villeneuve and also spent time as part of Jenson Button's management team.

Mark’s career in Formula One started in 1983, spending seven years working in the media and as a consultant to Philip Morris International before joining Eddie Jordan’s fledgling Grand Prix team in 1990. He was a member of the team's management board, having full responsibility for day-to-day marketing and commercial activities. The team became championship challengers in 1999 with Mark playing a pivotal role in building one of Formula One's most recognisable brands.

As Head of Marketing at the highly successful Jordan team over a ten year period, Mark Gallagher was famously described as 'head of making things happen' in Eddie Jordan's dynamic organisation. He then joined Jaguar Racing and in 2004 helped its transition into the now-dominant Red Bull Racing team, before taking over responsibility from 2009 until 2011 for the return of Cosworth to Formula One. During this period, Mark was directly responsible for supplying one third of the Formula One teams with engine technology, re-establishing the Cosworth F1 business which has powered 13 Drivers Champions and won 176 Grand Prix' - second only to Ferrari.

Since 2005 Mark has also co-owned his own racing team, Status Grand Prix based at Silverstone in the UK, which won the 2009 A1GP World Cup of Motorsport, has scored multiple victories in the GP3 feeder-series to Formula One and competes in the Le Mans sports car racing series. Status has three times won the 'Best Presented Team' Award, setting the benchmark in professionalism and presentation.

Today Mark Gallagher heads a sports investment group, sits on the board of Status Grand Prix and uses his vast experience of the Formula One industry to work with teams, sponsors and drivers. He also makes regular appearances in the media, notably with Sky News, and has been an expert pundit and commentator at Formula One events with ESPN Star Sports, broadcasting to 24 countries and 36 Million F1 fans in Asia.

More recently, Mark worked with the sports governing body, the FIA, to develop the new hybrid petrol-electric engine regulations introduced into Formula One in 2014. In the same year he published his second book - 'The Business of Winning - Strategic Success from the Formula One track to the Boardroom'.

Between 2005 and 2009 Mark was motor sport consultant to Disney Pixar on CARS and CARS 2. Mark also co-ordinated an agreement with Formula One CEO Bernie Ecclestone which enabled Disney Pixar to host its European media launch of CARS The Movie at the Spanish Grand Prix, and enjoys first hand experience of working with the man who created the global sport of F1.

Having worked at the forefront of the Formula One motor racing industry, including executive roles at Jordan Grand Prix, Red Bull Racing and Cosworth, Mark Gallagher delivers inspirational business lessons learned from a diverse career spanning almost 30 years in this high technology sport.

Mark Gallagher’s public speaking career began in 1998 when he was asked to speak for BT at a major management conference in Vienna, joining Mikhail Gorbachev and the President of Sony Europe in delivering key note addresses. Little did he know that the inaugural speech he delivered was to be the first of hundreds of ‘content-rich’ business speaking appearances, made at a wide range of corporate events around the world.

Credible when it comes to speech content, and charismatic in delivery, Mark Gallagher is an excellent public speaker with a 15 year track record. His insight into motorsport’s ‘winning ways’ will resonate with performance-driven organisations.

Mark’s most popular speech topics include:
• High performance teamwork and building high performance teams
• Motivation and leadership in high-pressure, highly competitive environments
• Digitilisation including Big Data, Data Analytics and how Formula One harnesses AI.
• Customer service - the client-centric organisation
• Partnerships and Sponsorship
• Quality control systems and their importance in F1
• Sustainability
• Health and safety - how F1 transformed its safety & risk management.
• Managing transformation and change - what happens when business models break, new models are needed, and dealing with the changes that everyone in business faces today.

Mark Gallagher was very well received on our management event focusing on leadership. His experience in Formula One related very well in terms of the issues concerning team building, motivation and having a clear vision for the organisation.

Your insights on team work and motivation were truly exceptional and we are delighted you could join us. Wonderful anecdotes, and very engaging.

On behalf of all the team at UK Sport thank you. Your presentation on The Power of Change was stimulating and entertaining, and the international audience was intrigued to find out more! It goes without saying that your passion for the subject matter was infectious.

Mark Gallagher's style and delivery were excellent, the speech had humour and yet kept the message we were trying to portray. His impact on the audience was very positive and motivating.

Mark Gallagher was excellent – very appropriate to the day but extremely humourous and engaging. His presentation was very relevant to us and the audience, he understood completely the brief given.

Thank you for presenting to us at the conference in Vienna. You made a great contribution to the Technology section of the conference and the Revolution theme as a whole. Judging from the buzz during coffee breaks and over meals you gave us all plenty to think about and debate. I am delighted to say that the initial response has been fantastic. Thank you for your entertaining, informative and thought provoking presentation.

Mark Gallagher's presentation was tailored to fit our business and conference theme, the delivery was professional, highly motivating and extremely interesting for our large international audience. Mark received excellent feedback from all delegates.

Having heard him speak at an EADS Engagement Forum in Paris I asked Mark Gallagher to speak at our Leadership Conference for Airbus in the UK. He was able to combine his experiences of F1, leadership and engagement in a humorous and enlightening way that really connected with the audience.

Clients often ask about purchasing books for giveaways and delegate packs. Below you’ll find a selection of products by Mark Gallagher. Click the images to view on Amazon's website. For bulk orders, please speak with your Booking Agent.

How to book Mark Gallagher for your event