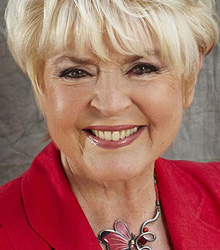 As one of Britain's best known TV and radio personalities, Gloria Hunniford requires little introduction. From chat show and current affairs host to presenter of religious and lifestyle programmes, Gloria is one of the few broadcasters who can genuinely claim to embrace the spectrum of popular culture.

Her elusive ability to communicate with people from all walks and backgrounds has earned her a rare iconic status in the hearts and minds of the British public, recently making her the subject of Piers Morgan's Life Stories for ITV. But it was with her moving and unsentimental account of her daughter's battle with cancer — in the best-selling books Next To You and Always With You— that she sealed her reputation as one of the nation's most respected writers and commentators. Her latest book Glorious Grandparenting: Having the Time of Your Life with Your Grandchildren is a wonderful celebration of what it is to be a grandparent today.

A prolific and talented broadcaster, Gloria Hunniford has long championed the role of the solo female presenter. In 1982 she became the first woman to have her own daily radio show on BBC Radio 2— which she presented continuously for 13 years — and she was one of the first female broadcasters to host her own chat show with the highly successful,Sunday, Sunday. Gloria has most recently presented the consumer programmes Rip-Off Food, Doorstep Crime 999 as well as the hugely popular Rip-Off Britain and Rip-Off Britain: Holidays for BBC1. She is a regular news reviewer for ITV1‘s This Morning, reporter for The One Show and one of the presenters of Cash in the Attic/Cash in the Celebrity Attic for BBC1/BBC2.

Gloria has also previously presented Angels for Sky Real Lives, co-hosted 3@Three for ITV1,Castle in the Country for BBC2and has been a regular guest on The Alan Titchmarsh Show for ITV1 and Channel 4‘s Countdown. Gloria Hunniford has won many prestigious awards during her 30-year career including TV Personality of the Year,Radio Personality of the Year and Best Dressed Female. She is patron of a number of charities and dedicates much time to the causes she supports. Gloria was President of the Television and Radio Industries Club 1999-2000 and received the Lifetime Achievement Award in 2001.

Gloria Hunniford has fronted numerous successful promotional campaigns and is in huge demand for corporate work. Most recently, she has been working with Flora pro.activ. Gloria had raised cholesterol and has successfully lowered it using Flora pro.activ from 6.35 to 5.22. Gloria is also a popular and enchanting guest of daytime shows, having made countless appearances across the channels.

In 2017 Gloria was awarded an OBE in the Queen’s Birthday Honours List for services to Cancer charities through Breast Screening Services and Cancer Support.

Clients often ask about purchasing books for giveaways and delegate packs. Below you’ll find a selection of products by Gloria Hunniford OBE. Click the images to view on Amazon's website. For bulk orders, please speak with your Booking Agent.

How to book Gloria Hunniford OBE for your event