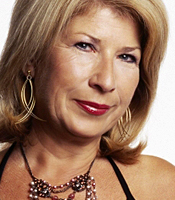 Broadcaster and journalist Jennie Bond appears regularly on a wide range of television and radio programmes - from light entertainment to documentaries.

She's known to young and old for her exploits in the jungle of ITV's I'm a Celebrity Get Me Out of Here when she was buried in a coffin full of rats and had to eat a variety of live insects.

Since then she has become a presenter on two of the BBC's most popular shows: Cash in the Attic, and Rip Off Britain. She also presented the highly successful BBC2 series Great British Menu. Other projects include: Royals at War, Masterchef, Too Many Cooks, Stars in the Fast Cars, The Big Call and Jennie's own personal account of her time as a royal correspondent in a three-part documentary series for Channel Five, Jennie Bond's Royals.

As the BBC's Royal Correspondent during 14 of the most turbulent years the monarchy has endured, Jennie was at the heart of events that made headlines around the world: from the fairytale marriages to the adultery, the divorces and the deaths.

Jennie Bond reported on it all and now enjoys sharing her experiences and often hilarious adventures with audiences at home and abroad. Her "confessions" include her faux-pas when she tried to amuse the Queen, her long and intimate conversations with the Princess of Wales and what Prince Charles really thinks of her white stilettos! She loves to make people laugh and to show them that she is quite different from how people imagined her when she stood outside the Palace. For many years Jennie was also a regular news presenter on BBC Television and presented the main bulletins as well as Breakfast.

She began her career in journalism after graduating from Warwick University in 1972. She worked on local papers as a reporter for five years before joining BBC Radio News. During the next few years she gained a thorough grounding in radio news, editing the main bulletins. She also worked as a producer on current affairs shows, including the very popular Woman's Hour, and in light entertainment, with Noel Edmonds.

She returned to full-time reporting in 1986 with BBC Radio, covering major news stories, for example in Northern Ireland. She also began her career as a presenter, anchoring among other programmes, the top current affairs show in the UK, Today, on Radio 4.

Jennie Bond has written a book Reporting Royalty that tells in detail of her years keeping tabs on Britain's Royal Family. It was published in September 2001 by Headline. In the Queen's Golden Jubilee Year, Carlton Books published her Elizabeth: 50 Glorious Years, a commemoration of the Queen's reign. She updated this book for the Queen's 80th birthday. Married with a 21-year-old daughter, she lives in Devon and thoroughly enjoys getting away from it all at her seaside home.

Jennie Bond also chairs conferences and seminars and is a highly skilled conference facilitator and after dinner speaker. She has a wealth of experience hosting events and award ceremonies, both at home and abroad.

Clients often ask about purchasing books for giveaways and delegate packs. Below you’ll find a selection of products by Jennie Bond. Click the images to view on Amazon's website. For bulk orders, please speak with your Booking Agent.

How to book Jennie Bond for your event