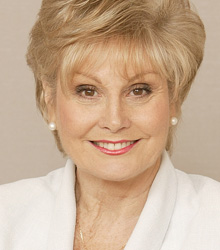 Angela Rippon has one of the best-known faces and voices in British Broadcasting.

Since her very first television broadcast for BBC Plymouth on September 5th 1966, the career of this award winning journalist has embraced an impressive variety of programmes on both radio and television for both commercial and BBC stations, in Britain and America.

The scope and quality of her work has been recognised by The Royal Television Society who have entered her on their Roll Of Honour. While her work has mainly been centred on her first love of News and Current Affairs, she is equally at home presenting programmes in a lighter vein ranging from the arts to quiz programmes.

In August 2000 Angela was appointed Chairman of the English National Ballet.

Angela Rippon received a CBE in the 2017 New Years Honours list for services to dementia care.

Clients often ask about purchasing books for giveaways and delegate packs. Below you’ll find a selection of products by Angela Rippon CBE. Click the images to view on Amazon's website. For bulk orders, please speak with your Booking Agent.

How to book Angela Rippon CBE for your event