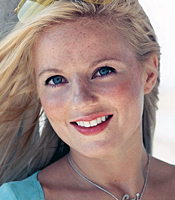 Geraldine Estelle Halliwell was born on 6 August 1972 in Watford, Hertfordshire.

In her time Geri Halliwell has been a club dancer in Majorca, a TV presenter in Turkey, an aerobics instructor, a cleaner, a barmaid, and a topless model.

That's not to mention Geri Halliwell's role in The Spice Girls - the biggest pop phenomenon of the late 1990s - whose debut single, Wannabe was released in 1996. The group's unofficial leader, Halliwell was commonly known in the press as Ginger Spice, notorious for her garishly provocative costumes, thick make-up and saucy behavior. The Spice Girls' star continued to skyrocket with popular singles including 'Say You'll Be There' and '2 Become 1', they even starred in a film, 1997's Spiceworld; however, after weeks of speculation, Halliwell officially left their ranks in mid-1998 amidst rumors of considerable in-fighting.

In 1998 Geri Halliwell split from The Spice Girls. Amid rumours of ructions, she left in May (although she did feature on the August hit, 'Viva Forever').

Geri Halliwell launched a successful solo career with four number ones. Her debut single in May 1999 was 'Look At Me', the album Schizophonic followed a few weeks later. Her image changed and she also became a UN Goodwill ambassador. She published her autobiography, If Only. Soon after she wrote her second book, "Geri Halliwell, Geri: Just for the Record", which discussed her battle against bulimia.

In 2004 Geri Halliwell resumed her solo career with 'Ride It'. In an interview with Jonathan Ross, she talked about her attitude to the opposite sex: "As I've got older I've got to trust my instinct a bit more. I'm interested in the man himself... I've dated a lot... I like a real male, an alpha male. I think we're designed to be with the perfect mate."

Clients often ask about purchasing books for giveaways and delegate packs. Below you’ll find a selection of products by Geri Halliwell. Click the images to view on Amazon's website. For bulk orders, please speak with your Booking Agent.

How to book Geri Halliwell for your event