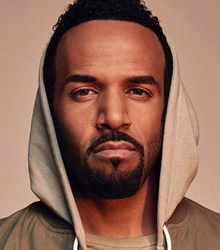 Craig emerged in late 1999 and early 2000 on the UK soul and R&B scene. His first success was as the smooth, soulful voice on Artful Dodger's 'Re-rewind When The Crowd Say Bo Selecta' that reached number 2 in the UK Top 40 and spent a total of 13 weeks on the chart.

At the age of 14, David was MCing on a local pirate radio station as well as at nearby clubs before moving into DJing, playing mainly garage. It was while involved in this scene that he met Mark Hill of Artful Dodger, also from Southampton. David's career was boosted when he won a national song-writing competition. The prize was to co-compose the b-side of 'Wonderful Tonight', a UK number 3 hit in 1997 for R&B stars Damage.

Given only the music, he put the finishing touches to 'I'm Ready'. Now travelling to London at the weekends to record in the studio, his first track was a cover of the R&B-tinged US number 1 'Human' by the Human League. It was his collaboration with Mark Hill 'What Ya Gonna Do' that gave David his first club hit and the track that eventually became 'Re-rewind'. Released on the Public Demand label, it became an underground hit and this led to appearances around the country.

Rising interest in the vocalist led to a deal with the Telstar/Capital Radio joint venture, Wildstar Records in August 1999. His first single for them, the infectious 'Fill Me In' received substantial national radio airplay and rose to the UK's number 1 spot in April 2000. David repeated the feat in August with '7 Days', and completed a memorable year by winning three MOBO awards two months later.

He was named best UK newcomer and best R&B act, and 'Fill Me In' was voted best UK single. During the following twelve months he began to make an impact across the Atlantic, culminating in '7 Days' breaking into the US Top 10 in February 2002.

How to book Craig David for your event