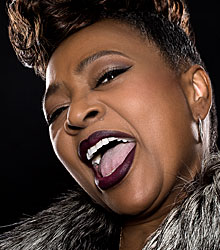 Jocelyn Brown is a versatile singer with powerful and passionate voice. She came from a family where her grandmother, mother, two aunts and a cousin all sang, but it was her aunt Barbara Roy, who sang with female vocal group EPP that inspired her to sing seriously.

Born in North Carolina, USA, Jocelyn Brown began singing in church and with various gospel choirs out of Brooklyn and built up a solid following, becoming a favoured soloist at her uncle's church in Washington DC.

Gradually, Brown left gospel for secular music, disco in particular, singing with local bands like Machine and Kleeer. Initially a member of Monty Rock's pseudo soul group Disco Tex and the Sex-O-Lettes, she moved onto different projects, working with producer Greg Diamond and the group Change, which featured a male vocalist by the name of Luther Vandross. Soon, Jocelyn was travelling all over the world doing what she loved best, singing.

When the members of Change disbanded, Brown started recording with other groups like Inner Life on Salsoul Records, where she sang solo on a superlative disco version of 'Ain't No Mountain High Enough' and established herself on the dance club circuit.

In 1981, Jocelyn released the highly collectable soul song 'If I Can't Have Your Love' and the following year she working alongside Bette Midler in the movie
Divine Madness'.

After releasing 'Caught Up in a One Night Love Affair', Jocelyn teamed up with her sister Annette and wrote 'Somebody Else's Guy,' her most popular recording to date, which reached the number two position of Billboard's Black singles chart and number 13 in the UK.

In 1991, Jocelyn recorded with the UK band Incognito singing a version of Side Effects 'Always There'. Brown still writes songs with her sister Annette, who also helps manage her family members' creative activities.

Her unaccredited vocal hook for Snaps 'I Got The Power' is just one of countless examples of Jocelyn's voice being sampled across the genres. Each time reinforcing her indelible impact on contemporary music.

Jocelyn lives in London and continues to be an in-demand vocalist at private and corporate events.

How to book Jocelyn Brown for your event