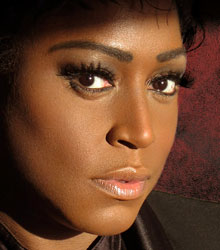 Mica Paris is one of the UK’s most respected female singers with a career full of Top 10 hit singles and albums worldwide. The range, power, and sheer soulfulness of Mica Paris' singing made an immediate impact on the UK music scene in 1988 when she released her debut, platinum-selling album, So Good from which she had her first top ten hit, My One Temptation.

More worldwide hit albums and singles followed, including Black Angel, Stay and Carefree, together with collaborations with respected artists such as David Gilmour, Prince and Jools Holland, before turning her many talents to London’s West End stage starring in Mama I Want To Sing, The Vagina Monologues and Sweet Lorraine.

In 2002, Mica extended her talents into broadcasting and presented The Gospel of Gospel, a TV documentary tracing the influence of gospel on American popular music with interviews with Ray Charles, BB King, Al Green, to name a few and recently presented an episode of Treasures of Britain for More 4. Mica also hosted her own radio show, Soul Solutions for BBC Radio 2 and with an average of a million listeners, it became the most successful soul and R&B show in the UK.

2003 saw Mica presented with the Gold Badge Award by the British Academy of Composers and Songwriters for her contribution to the British entertainment industry and in 2004 she was in the Top 10 list of the 100 Great Black Britons. Towards the end of that year, Mica recorded a soul album based on her BBC Radio 2 show before leaving for Australia for a series of special live performances in Sydney.

Upon her return, Mica hosted two seasons of the popular BBC 1 TV show What Not To Wear. Other TV shows followed with Mica being an expert judge on Gok Wan's Miss Naked Beauty 2008 for Channel 4 and ITV's CelebAir and is also a regular guest on ITV’s This Morning and Loose Women. In 2007 she wrote an empowering book Beautiful Within, published by Simon and Schuster to critical acclaim and in 2015 was a popular contestant on BBc One’s Celebrity Masterchef.

Mica was honoured as an "Icon" at Windsor Castle by the Duke Of Edinburgh, presented ITV’s Christmas Carols and has been a special guest of legendary artists such as Dionne Warwick and Michael Bolton, while performing her own incredible solo concerts throughout the world.

Recent musical theatre credits include Sylvia in the UK tour of Love Me Tender, based on the music of Elvis and Mama Morton in the UK Number one tour of Chicago.

Clients often ask about purchasing books for giveaways and delegate packs. Below you’ll find a selection of products by Mica Paris MBE. Click the images to view on Amazon's website. For bulk orders, please speak with your Booking Agent.

How to book Mica Paris MBE for your event