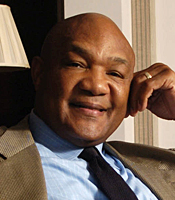 George Foreman was born in Texas into a large but poor family. His earliest memories are of being hungry. He found school difficult and felt he was written off because of his scruffy clothes. He had a short temper and would often get into fights as a child, sometimes beating people up for no reason. Soon he discovered that mugging was an easy way to get funds and terrorised his neighbourhood, although he never used knives - just his fists.

Heading nowhere fast, George was saved by The Job Corps, a project started by President Lyndon Johnson which aimed to get training and jobs for young people with few opportunities in life. It introduced him to boxing and he began to train seriously. George won the gold medal for heavyweight boxing at the Mexico City Olympics in 1968 and became a professional boxer.

He defeated Joe Frazier in 1973 and became heavyweight champion at the age of 24. After being defeated by Muhammed Ali at the infamous Rumble in the Jungle in 1974, George took up religion and became a preacher, giving up boxing for good ... or so he thought.

By the mid-80s George was short of money: he was building a community centre and wanted it to be well stocked with equipment. So he returned to the only honest way he knew of making money. Ten years out of practice in 1987 when he was 38, George started to train again. Remarkably, on 5 November 1994, at the age of 45, George won the heavyweight title for the second time - this time against Michael Moorer, aged 26, by a knockout in the 10th round.

Clients often ask about purchasing books for giveaways and delegate packs. Below you’ll find a selection of products by George Foreman. Click the images to view on Amazon's website. For bulk orders, please speak with your Booking Agent.

How to book George Foreman for your event