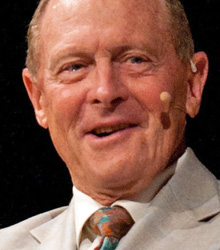 In a prolific and sometimes controversial playing career from 1962 to 1986, Geoffrey Boycott established himself as one of England's most successful opening batsmen of all time. He was noted for his ability to occupy the crease and became a key feature of England's Test batting line up for many years.

Geoffrey Boycott accumulated large scores – he is the equal fifth highest accumulator of first-class centuries in history, eighth in career runs and the first English player to average over 100 in a season (1971 and 1979).

After 108 Test match appearances for England, Boycott ended his international career in 1982 as the leading Test run scorer with over 8,000 Test match runs, earning an OBE for services to cricket. When he left the Yorkshire team in 1986 he was the leading run scorer in first-class cricket. In 1965 while still a young player he had been named as one of five Cricketers of the Year by Wisden, the cricket almanack, and he was inducted into the International Cricket Council's Hall of Fame in 2009.

As well as a batsman, Geoffrey was also a medium-pace bowler, often bowling while wearing his cap turned back-to-front, but was never a genuine all-rounder. He took seven wickets at Test level at an average of 54.57.

On 16 August 2003, Geoffrey was given a standing ovation by the crowd at Trent Bridge as he and a number of other cricketers did a lap of the ground in vehicles to celebrate Trent Bridge’s 50th Test match.

How to book Geoffrey Boycott for your event