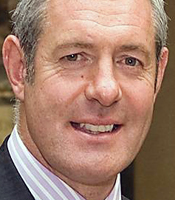 Gavin Hastings OBE is one of the most outstanding rugby players of his generation. He has played in three Rugby World Cups and toured twice with the British & Irish Lions.

He grew up in Edinburgh, attending George Watsons College, where he discovered his talent for rugby. Then, arriving at Cambridge University where he studied land economy, he played in two Varsity Matches in the mid 80's, captaining the light blues just five weeks before winning his first cap for Scotland — in a close-fought 18 points to 17 victory over France, kicking six penalty goals in the process.

Sixty further caps followed including twenty as captain. Hastings retired from international rugby having played in the first three Rugby World Cups and touring with the British Lions to Australia in 1989 and New Zealand (as captain) in 1993. Among his highlights were being part of only the third Scottish team to win the Grand Slam in 1990 and scoring a last gasp try in Paris in 1995 after twenty-six years of waiting. A party was long overdue on that occasion!

Gavin Hastings has captained every team he ever played for including Watsonians, Cambridge University, London Scottish, Scotland, the Barbarians and the British Lions. He is widely recognised as one of the finest players of his generation, having amassed 733 points in Test Match rugby over a ten year professional playing career.

He was awarded an OBE in 1994 for services to rugby and was inducted into the International Rugby Board Hall of Fame in 2013.

Alongside international rugby, Gavin Hastings developed a parallel career in business leadership. He qualified as a chartered surveyor at CB Richard Ellis in London and Glasgow, before following his passion and setting up his own business. He sold the company some ten years later, having brought the Ryder Cup to Scotland in 2014 and is now engaged with a number of different charities.

He is now a Director of two separate businesses which he started with former work colleagues; a corporate events and hospitality company plus a consultancy whose mission is to help business leaders excel under pressure. He has been a brand ambassador for HSBC and De Vere hotels and currently represents Land Rover and Magnum Cream Liqueur. He also sits on the Board of Edinburgh Rugby.

Gavin Hastings’ encyclopaedic knowledge of rugby, combined with a keen interest in the heritage and personalities behind the sport, make him an informative and entertaining speaker; whether it’s a light-hearted anecdotal talk at a black-tie dinner or motivational keynote speech at a company conference.

However, Rugby is not the only sport in which Gavin excels. He is also a talented amateur golfer, playing off a handicap of three and regularly hosting corporate golf events — playing the course and then giving an after dinner speech. With warmth and humour, he shares his insights on international sport and leadership with audiences around the world.

When not travelling to all corners of the globe, speaking and presenting, he follows his son Adam’s promising rugby career.

A massive thank you for your fantastic support, warm welcome to all our guests following the reception, your speech/inputs and how you linked everything together.

Great job today Gavin, many thanks again, hope it’s not too long again before we reconnect.

I am pleased to hear you enjoyed your time, I am sure all of our guests enjoyed interacting with you also! Thank you for being here and attending... hopefully in the future we will have an opportunity to work together again.

Clients often ask about purchasing books for giveaways and delegate packs. Below you’ll find a selection of products by Gavin Hastings OBE. Click the images to view on Amazon's website. For bulk orders, please speak with your Booking Agent.

How to book Gavin Hastings OBE for your event