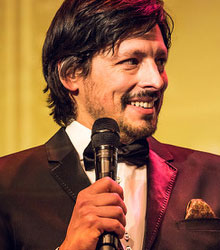 He specialises in engaging any audience by incorporating their native languages, whatever they may be.
From exclusive private events and high-end award shows or gala dinners through to film shoots for BMW or personalised international corporate events, Fernando brings his charismatic, professional style and flair to any atmosphere, including:

Fernando has studied English and German Literature and Linguistics at Zurich University and holds an MA from the Sorbonne University in Paris. He studied acting at the Stella Adler Conservatory and HB Studio in New York, as well as film editing at the Spanish Film School (ECAM) in Madrid.

He has travelled extensively, both for work and pleasure, through all of Europe, Russia, Africa, North and South America, South-East Asia, Australia and New Zealand.

In addition to his six fluent languages we love that Fernando can now enable us to engage with our Russian-speaking audiences as well. There is no one we know of that can do what Fernando does.

Fernando really delivered for us at our principal European trade show IFA in Berlin... to conduct multiple language interviews over a space of 24 hours. A consummate professional, he delivers immediate value and we can highly recommend him.

Fernando is the voice and soul of our International MINI Dealer Experiences. He is always very well prepared and extremely consistent in delivering messages across multiple languages. We trust him to present to thousands of our closest business partners.

During one of our recent international conventions, Fernando facilitated our gala dinner in more than five languages. His energy was infectious, his stage presence captivating and he set the tone for a relaxed and convivial evening.

Having successfully entertained our 650 international guests in Venice in 2017, skilfully switching between languages during the show, we were so impressed we invited him back to moderate the Award ceremony in Paris in 2018.

How to book Fernando Tiberini for your event