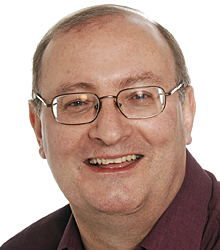 Alan Dedicoat has the voice millions in the UK certainly recognise and many envy. His is the official "Voice of the Balls", providing commentary for the National Lottery draws on the BBC iPlayer and on Camelot’s website (and live on BBC One for over 20 years). He is also the voice of the hugely successful “Strictly Come Dancing”.

In recent years, Alan has toured with the Central Band of the RAF as concert host – taking in towns and cities across the UK – raising money for the RAF Charitable Trust.

Alan originally trained to be a lawyer, but was seduced by hospital radio into a career in broadcasting. Several years on local stations were followed by a move to London and BBC Radio 2, eventually becoming the national network's Chief Announcer - and for many years he joined in the banter with the late Sir Terry Wogan on his Radio 2 breakfast show.

As well as providing live voice-overs for corporate events and speaking after dinner, Alan is a natural quizmaster. With a stream of quips, he maintains perfect order as he tests teams on everything from pop hits, national flags and company logos to knowledge of their industry.

Across the Atlantic, he can be heard as the British announcer on ABC’s "Dancing with the Stars".

Most recently, he has been hosting the Breakfast Show on Mellow Magic, one of Bauer Radio Group’s raft of digital radio stations.

Alan was a star and we couldn't have had such a successful day without him. He was all I expected he'd be and he carried the day for us. A true professional, no fuss, no dramas and completely reliable.

Changing a host who has hosted our awards for over 20 years can be a gamble however from the moment I spoke in person with Alan I knew we were in good hands. Alan has a special charisma about him that draws in the audience. He is very witty and engages well with our guests. Our feedback from our sponsors has also been very good, they found Alan to be a breath of fresh air and quite funny (exactly what we needed). Alan brings a wealth of professionalism and was definitely a pleasure to work with.

How to book Alan Dedicoat for your event