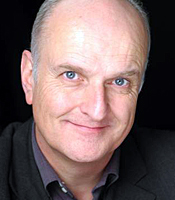 An overnight success after 35 years, Peter Dickson makes big award winning shows like The X-Factor, Britain's Got Talent, Family Fortunes, The Paul O'Grady Show, The National Television Awards and Chris Moyle's Quiz Night what they are.

His voice is now well and truly cemented in the public conscience. At 17 he became the youngest TV news presenter in the history of the BBC before landing his own Radio 2 series and working with some of the greats of British comedy, music and entertainment.

Peter Dickson became a staple of Steve Wright's legendary BBC Radio shows in the 80s and 90s, before jumping ship from the Beeb to launch Melody Radio, now Magic, in London where he presented the breakfast show.

Peter was Steven Spielberg's first call when he needed to create impact for Microsoft's initial Kinect game - "Kinect Sports" for the X Box 360 Kinect launch at E3. And when Lord Simon Cowell demanded a voice that mattered on The X-Factor, there was only one contender. Blimey – to many people Peter Dickson is The X-Factor – Accept no substitutes!

Peter Dickson is available for awards hosting, presenting and Voice of God for awards ceremonies, corporate dinners and conferences.

I have invoices for 3 expensive mic pre amps he has completely destroyed by shouting too loud! Does he think I'm made of money?

He has just been voted as one of the top 3 iconic voices in Britain.

He has a voice to die for. Apparently they're all buried under his patio. Legend.

You know who the best voice is on the X Factor? It's Voiceover Man!

Clients often ask about purchasing books for giveaways and delegate packs. Below you’ll find a selection of products by Peter Dickson. Click the images to view on Amazon's website. For bulk orders, please speak with your Booking Agent.

How to book Peter Dickson for your event