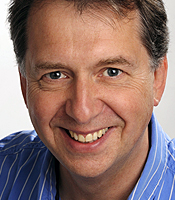 Martin Buchanan is an accomplished performer with years of corporate and broadcast experience. He was one of the UK's first video jockeys when, for several years, he presented his own show on the pan European pop TV satellite channel ‘Musicbox'. The programme garnered a huge following in Holland and Scandinavia.

A spell hosting a nightly programme with Radio Luxembourg followed before he headed home to become part of the presenting team at Capital Gold. He was also the voice behind Sky TV's ‘Sale of the Century' and BBC 1's Going for Gold.

Following time at London's Melody FM, Martin stayed on when the station became Magic 105.4. He went on to present drivetime for five years – a show that became one of the most listened to commercial radio programmes in town.

While at Magic FM, Martin Buchanan regularly hosted Disney live events including the ‘Disney on Ice' spectaculars at Wembley. He was the ‘Voice of God' for several years at the Independent radio news awards sponsored by Sky.

Martin also has considerable live and recorded TV promo and continuity experience - including time spent with GMTV (voicing those ‘tricky' competitions!) BBC, Sky Movies, Discovery and the Disney Channel. He is the voice of the Barclays ATP tennis finals at the 02 playing to a live audience of 36,000 a day and a television audience of 100 million + around the world.

Martin Buchanan has a lovely rich tone that engages the audience and his voice feels familiar and friendly yet confident and strong. He regularly voices corporate reads and commercials from his fully equipped ISDN Studio.

How to book Martin Buchanan for your event