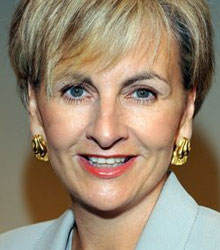 A gifted, multilingual communicator, Frances also uses her linguistic, creative and broadcasting skills to deliver relevant, inspirational and, above all, realistic strategies for personal and professional fulfilment. She is also recognised as an impressive conference moderator and event host.

After graduating with honours in Modern Languages from Cambridge University, Frances Edmonds trained as an international conference interpreter at the European Commission in Brussels. She went on to work for the major international organisations (EU, UN, OECD, WEU) and for the G7 heads of state and government at their annual World Economic Summits.

Fifteen years of negotiating at the highest international level taught her invaluable lessons in the art of cross-cultural communication and consensus creation. Frances builds on these insights to deliver powerful messages on the challenge of leadership and team building in today's richly diverse and constantly changing corporations.

Her professional writing career began in 1986 when she accompanied her husband, international cricketer Phil Edmonds, on England's disastrous tour to the West Indies. It was there that she wrote her first highly controversial best seller, Another Bloody Tour, which shook English cricketing and sporting establishments to their foundations.

In 1989, Frances wrote Members Only, a search for signs of independent, intelligent life in the Houses of Parliament. She found few. Her subsequent novels, Samson and Delilah, Star of Heaven and Games were all greeted with international critical acclaim. Her book, Winning The Game of Life (published by HarperCollins, June 2001) suggests tools for personal success and motivation and embraces techniques employed by many of Britain's foremost captains of industry and sportsmen and women.

Frances Edmonds has wide experience on radio and television, hosting programmes as diverse as Women on Top, Men Behaving Sadly, A Game of Two Halves and The Greatest and appearing on programmes as different as Question Time and Question of Sport. She believes that a genuine interest in other people and their issues is as crucial to interviewing as to the successful hosting/chairing/moderating of any ceremony or conference.

Elected an honorary fellow of the British Association of Women Entrepreneurs for her promotion of British business interests, she also appears as a news reviewer for BBC TV's Breakfast with Frost and is a regular contributor to a wide range of publications including The Times, The Sunday Times and The Evening Standard. Frances is a gifted communicator who uses her extensive international experience and creative skills to understand, entertain and inspire her audience.

And all this, in five different languages...

My sincere thanks to you for such a great job in Edinburgh. Your contribution to our company was just what Neale and I needed and your professional approach really helped us to “make a difference”.

Your presence in the Forum creates an unforgettable experience for the delegates and it is always a true pleasure to work with you. You were fabulous! Our star! Thanks again and we look forward to seeing you again soon.

The feedback I have received has been outstanding. Comments on your contribution included “thought-provoking, empowering, inspirational, motivational, real women like me with real problems!

Thank you for your brilliant session at our NHS conference. Your session hit just the right note of formality, informality, professionalism and fun – many of the delegates were crying with laughter but took away very serious messages...

Clients often ask about purchasing books for giveaways and delegate packs. Below you’ll find a selection of products by Frances Edmonds. Click the images to view on Amazon's website. For bulk orders, please speak with your Booking Agent.