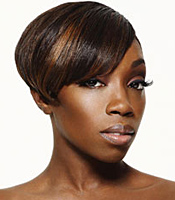 Book Estelle
add to shortlist
About

To most hip hop fans Estelle however needs no introduction. In 2002 Tim Westwood declared her as "a UK talent to look out for" and Music Week cited her as the one UK rapper "most likely to challenge the mainstream". Having built up a formidable reputation on the street over the past two years, Music Week's prediction came true when Estelle broke into the charts with "1980" and "Free" and won a Mobo Award for Best Newcomer in 2004.

Although firmly rooted in the underground, Estelle has always had commercial success in her sight and has come through with an album which not only shows off the lyrical dexterity for which she is loved, but one which also unleashes her powerful vocal range. It might surprise some that this girl can belt out pop-tinged R&B tracks that are headed straight for the charts, and slow jams that will make your knees tremble, while giving us the kind of laid back hip hop that feels like food for the soul. In fact there is soul here in spadefuls, real soul, gathered from every corner from gospel to Motown, with rimshot-peppered jazz skits, dramatic, string-laden orchestral productions, and sultry ballads thrown in for good measure.

From the minute she decided to take her career seriously, Estelle had carved out a master plan. Everything she did from that day forward was geared towards learning about the music industry and getting her name out there. At 17 she had landed at job at hip hop record store Deal Real in Soho, followed by stints as a video producer and music journalist for urban website darkerthanblue. It was Deal Real that encouraged her to get on the mic, and she was soon a fixture at London institutions the Lyrical Lounge, The Hop and Scratch. Her big break came when she stepped up to the stage at Subterania alongside Roots Manuva and Rodney P. Estelle's performance astounded everyone, and as the crowd included some of the biggest names on the scene, her reputation as the queen of the M.I.C. was sealed. Among the admirers was 1Xtra DJ Skitz, who immediately asked her to appear on his groundbreaking album "Countryman".

Born of a Senegalese mother and father from Grenada, Estelle grew up in West London in a large family of eight brothers and sisters and an extended family of cousins. Her mother was a massive reggae fan and her dad built home made speaker cabinets that shook the whole house. She spent her childhood listening to her parent's reggae records and her aunt's soul collection. Then she discovered hip hop. "I got into hip hop from my uncle, he was always playing us Kool G Rap and Big Daddy Kane; he was a bad boy and my mum wasn't really happy that I was hanging out with him".

How to book Estelle for your event