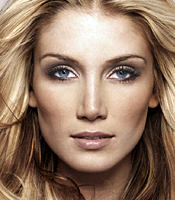 Delta Goodrem, who hailed from Glenhaven in Sydney's north western hills, loves performing - at age 5 she sung her first song, Olivia Newton-John's "Hopelessly Devoted To You" (from the movie "Grease"), on her father's 40th birthday.

She started piano lessons at 8 years of age (she now plays the piano on barefoot, her trademark); singing school when she was 10; then went on to drama and dancing. She began writing songs at 12 and used the money she saved from television appearances to record her first demo CD at 13, then sent the CD to her friends and her parents' friends.

Knowing her passion for the Swans, friends sent Goodrem's CD to the club. She had included the Australian national anthem in the hope she might be invited to sing it sometime before a game. (Another version said that Goodrem sent a tape of her singing of the Swans anthem to the club.)

The club president was so impressed with the demo that he passed the copy to Glenn Wheatley, then a Swans director, but better known as the manager of veteran Australian singer, John Farnham. Wheatley was so impressed that he contacted her and later became her manager. When she was ready, a new CD was sent to record companies, before Sony signed her three years ago (she and her mother travelled to New York to meet with Sony boss Tommy Mottola before putting pen on paper).

In November 2001, Sony released her debut single, 'I Don't Care'. It achieved moderate sales despite favourite reviews from radio stations, and both Sony and Goodrem were forced to rework on her singing style so she could start preparing her first album.

She was still working on her album in early 2002 when the producers of Channel Ten's long-running soap 'Neighbours' approached her to fill the role of Nina Tucker, a painfully shy new girl at Erinsborough High who has an amazing voice but is too afraid to sing in front of anyone.

After one audition, Goodrem was given the role. Her character first hit the screens in July 2002, and her first single, 'Born to Try', debuted on November 10, days after her 18th birthday, and exactly one month after her character played the song on piano in 'Neighbours'.

How to book Delta Goodrem for your event