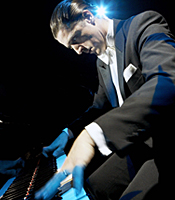 Live bands always add great excitement to any party and Harry's band certainly will get your guests on their feet. Possibly the best TV band in the world, the powerful house band from the BBC chat show 'Johnny Vaughan Tonight' is available for private and corporate bookings.

With the addition of singers who are no strangers to the TV themselves, this band will blow your mind! The group comprises of a who's who from the UK's music scene and features Simon Cowell's vocal coach from the X Factor, Craig David's guitarist,Jools Holland's bass player, Ronnie Scott's resident drummer, Simply Red's keyboardplayer and even the Eurythmics musical director as a 'mere' bass player!

This band plays almost any song you can think of and isextremely popular for the more traditional party tunes by artists from the sixties right up tothe current chart hits.

You guys were great, I really enjoyed that!

That's a fab band. They were doing a warm up before the show that was just fantastic.

How to book Harry's Band for your event