Former England Rugby player and Director of The Leicester Tigers 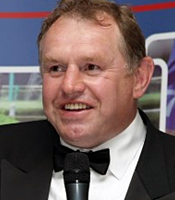 There are only three men to have played for England in three World Cups - Brian Moore, Rory Underwood and Dean Richards. Dean is a former Police Constable and now Director of Rugby for NEC Harlequins. His quiet but fearless presence in mauls and uncanny ability to come out with the ball made him a hugely popular player with fans of rugby union throughout the World.

England's grand slam winning sides were grateful to have him rallying the forwards when the pressure was on. Dean's outstanding leadership qualities enabled him to get the best from his colleagues in tough situations, and this ability set him apart as a player.

Dean joined NEC Harlequins as Director of Rugby in May 2005, Dean joined the club from French side Grenoble where he was General Manager. Prior to joining Grenoble, Dean enjoyed a very successful spell as Director of Rugby at Leicester Tigers. During his time in charge, Dean led the club to four consecutive league titles in England as well as back-to-back victories in the Heineken Cup.

Dean Richards' motivational skills have now transferred to the conference forum where he is in high demand as a motivational speaker.

Clients often ask about purchasing books for giveaways and delegate packs. Below you’ll find a selection of products by Dean Richards MBE. Click the images to view on Amazon's website. For bulk orders, please speak with your Booking Agent.

How to book Dean Richards MBE for your event